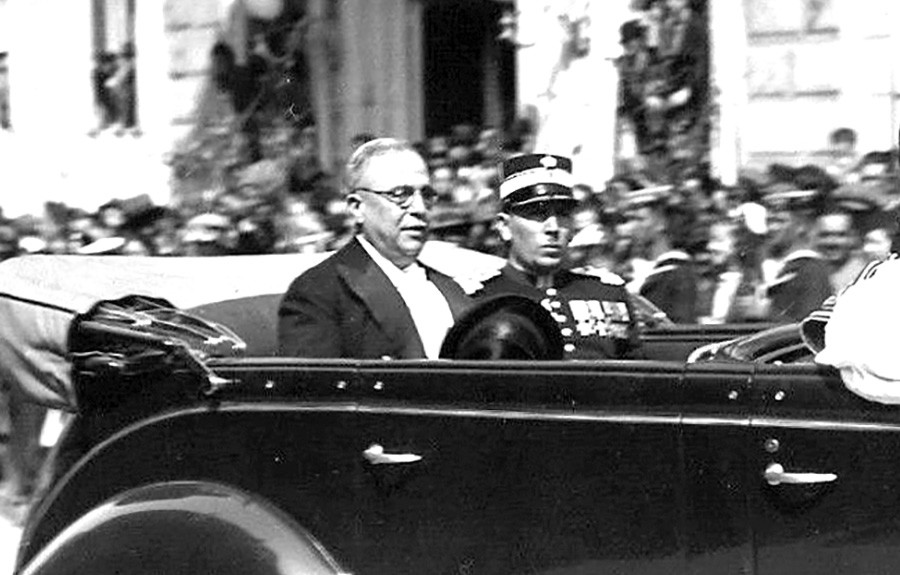 The 1940 plot against Metaxas

One of the few episodes of actual significant opposition to the 4th of August State occured in June 1940, when a number of pro-Axis politicians and officers tried to change Metaxas’ foreign policy orientation and align Greece with Nazi Germany.

The core of the plot was made up of old germanophiles from the time of World War I, and most of them had been, paradoxically, lifelong Metaxas supporters. The most powerful of all was the retired officer Theodoros Skylakakis, a close associate of Metaxas from the time of the Leonardopoulos–Gargalidis coup d’état attempt. Skylakakis had been the leader of Metaxas’ Freethinkers party and had been a minister during the first months of the 4th of August State, but had been expelled in December 1936 for his involvement in a early conspiracy against the regime. Since then he has been in constant contact with the German embassy, ​​but also under the close surveillance of the Greek secret police leaded by Maniadakis.

Another old acquitance of Metaxas involved was Theodoros Tourkovassilis, a pro-German fanatic who had been one of the co-founders of the Freethinkers party nearly twenty years before and had been deputy for the party until 1935. Other members of the conspiracy were anti-Venizelist politicians such as Stephanos Stephanopoulos, Dimitris Polyzos, Petros Rallis, Pericles Rallis and Sotirios Gotzamanis – loyal to his pro-Axis inclinations, the latter would be minister of the Greek collaborationist government during the Axis occupation of Greece.

The plan would have no hope of success without military support. The main supporter of the plot on the Army was Lieutenant-General Constantine Platys, who joined the initiative because he considered it a big mistake to have Greece opposed to the Axis.

Talks about aligning Greece with the Axis powers had been a long-standing wish among pro-German officers, but the conspiracy intensified after the start of the Second World War in 1939, when Germany appeared as invincible. The plot was secretly funded by Germany, who wanted Greece on her side, through Egon Kontoumas, a Greek-German businessman. Kontoumas was a chemical engineer of Nazi leanings who would later be a founding member of the collaborationist Bundt organization. He acted as liaison between the pro-Axis Greeks and their Nazi patrons in Germany.

However, the plot was also under close observation of the almighty security guard of the regime, Maniadakis, head of the police and the Asfaleia (the Greek Gestapo). Maniadakis informed Metaxas almost daily about the activities and discussions of those involved in the conspiracy, an information he gathered thanks to the wide network of informants he had developed in Athens and across Greece. Metaxas took the threat of the pro-Axis germanophile seriously and attentively followed the events, and he reflected his worries on many notes in his personal diary.

Although all the events were closely watched by the all-powerful Asfaleia and all the conspirators’ movements and visits to the German embassy were recorded, Metaxas prefered to take no action against them because the whole case seemed to lack enough strength, he did not want to trouble Germany at a very critical moment and the conspirators had not yet taken any action really.

The plot finally materialized on 3 June 1940, when General Platys formally asked Alexandros Papagos, the Chief of the General Staff, to step down from the Army’ leadership as the former allegedly had been informed by diplomatic sources that Papagos was unliked by Germany. The idea was to replace Papagos and his entourage with pro-Axis officers.

Papagos informed Metaxas, adding that he considered it unlikely that Germany would have expressed such views without using the official diplomatic channel. This was the perfect moment for Metaxas to take action and wipe out the germanophiles once and for all, and with a tough move with the help of Maniadakis’ well-oiled machinery, he swept all the conspirators within a few hours. Platys was arrested, was subjected to constant interrogations and eventually banished, while all the other conspirators were arrested and put behind bars or into exile. Kontoumas was forced by the Asfaleia to leave Greece in order not to be arrested and avoid a diplomatic incident, while Metaxas closed the offices of a German-speaking newspaper in Athens, where talks on the conspiracy had been held. Even some pro-Axis members of the EON were ousted.

The most alarming thing for Metaxas was that the whole plot was known to his closest associate Kostas Kotzias, who seemed to be entertaining the idea of succeeding Metaxas and lead Greece to the Axis side. However, after the events Kotzias presented himself to Metaxas and assured him of his total loyalty to the Archigos, but the Cephalonite only accepted his pledges bitterly, as his trust on his old close associate had now cracked.

The public was never informed of the conspiracy, as it would undoubtedly have led to international complications. The germanophiles -except for Kotzias and some other state officials- would remain exiled or imprisoned until the German entrance into Athens in April 1941, after which they were released. After Metaxas’ death and with Koryzis as prime minister, Platys returned to the Army and was appointed chief of staff in Epirus with Papagos’ approval. The other germanophiles either would later be ministers of the successive Greek quisling governments (Gotzamanis, Polyzos), or they would hold office in the collaborationist state machine during the occupation (Tourkovassilis).