1940 – The formation of the 1st Greek ski battalion 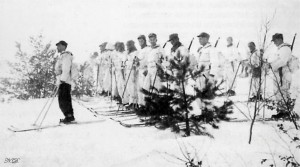 Few days after the Italian invasion through the Greco-Albanian border (October 28, 1940), Ioannis Metaxas and the Greek Army High Command issued an order to set up the 1st Ski Battalion.

Until then, there was no formal ski battalion within the Greek Army. Skiing had been a privilege of the upper and the highest class of the prewar Greece, until it was introduced to the middle class in 1930-31 by the Greek Alpine Club – Ellinikos Oreivatikos Syllogos (Greek-Ελληνικός Ορειβατικός Σύλλογος-ΕΟΣ) and its local branches in Greek towns.

When the war broke out, personal invitations to members of mountaineering clubs were sent. The clubs responded with the majority of eligible men enlisting and with all clubs’ money and equipment offered to the Army. Thus, many skiers from EOS became the personnel of the first battalion, together with soldiers serving in other military units (Royal Hellenic Navy even or the Royal Hellenic Air Force) or other members of the Greek Alpine Club who volunteered too, with Alexandros Vouksinos (17 years old) its youngest member.

After the appeal, 130 experienced skiers (bringing their own skis, batons and ski boots) formed the 1st Coy. After a short period of military training at the Central Greek town of Metsovo, its men were sent to the front, at the highest point (2100 metres high) of Mount Kamia, Mnima tis Grias in Greek (“Μνήμα της Γριάς” – “Old Woman’s Tomb”).

The 2nd and the 3rd Coy, were formed from conscripts from 5 mountainous divisions. Each division sent 50 fusiliers for ski and alpine conditions training by 6 men from the 1st Coy. Their equipment was donated by the ΕΟΣ and individuals. The men of the ski battalion were equipped with the Steyr-Solothurn S1-100 SMG machine gun, a part of a large order made by Social Safety minister Konstantinos Maniadakis in 1937. 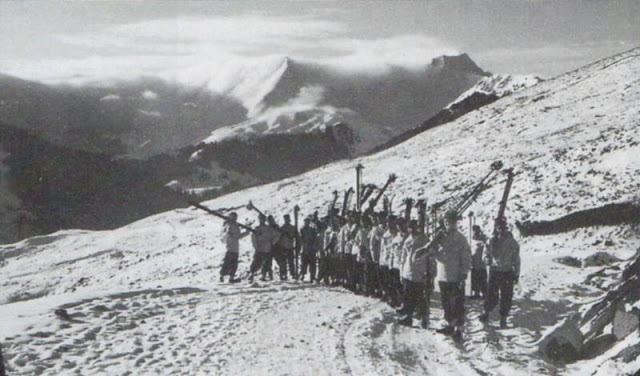 Artillery Major Ioannis Paparrodou (Greek: Ιωάννης Παπαρρόδου, 1904–1941), himself a cross-country skiing champion, was appointed as C.O. of the Battalion. He had been born in the central Greek town of Lamia in 1904. He was a Greek Army Regular Officer who had graduated from the (Army) Evelpidon Military Academy as a Second Lieutenant of the Artillery in 1923.

But Paparrodou was also a winter sports athlete and champion at the Panhellenic Games of 1935. At the outbreak of the Greco-Italian War in October 28, 1940, he commanded the 21st Mountain Artillery Company positioned in Pogradec, southern Albania. But because of his previous experience in winter sports, Paparrodou was appointed commander of the first Alpine Battalion of the Greek Army.

In April 1941, when Nazi Germany attacked Greece through the Greek-Bulgarian frontier, Paparrodou was ordered to defend strategic positions at the Kleisoura pass, near Kastoria, Western Macedonia. At the battle that followed, he resisted against the vastly superior German forces and died fighting on April 13, 1941.

After the end of the war, when the army organised a directorate of ‘Special Forces’, including mountain units (LOK), General Kallinsky, their first organiser, asked for and was provided with both oral and written information by members of the former ski battalion. 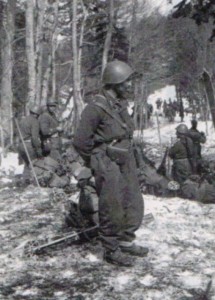 The cut of the special ski uniform of the Greek Army Alpine Battalion resembled the typical ones of its time. The jacket was cut shorter to provide extra comfort, while the trousers were cut in the Norwegian style(which likely refers to the tapering at the ankle). 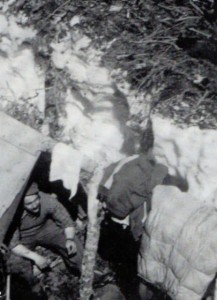 The men of the 1st Coy were equipped with sleeping bags and, instead of heavy military overcoats, with special made ski outfits and white covers for camouflage. 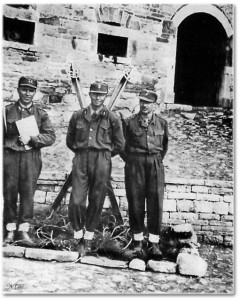 Ioannis Paparrodou at Moschopolis (English Moscopole), Albania, where the battalion’s headquarters were located during the Greek-Italian war waged in Albania

Article by Thanos Koutsikopoulos, who at the age of 96 is possibly the last surviving member of the 1st Ski Battalion

For a re-enactment of the Greek ski battalion, visit http://khaki4depot.blogspot.com.es/2015/12/greek-army-1st-ski-battalion-greco.html