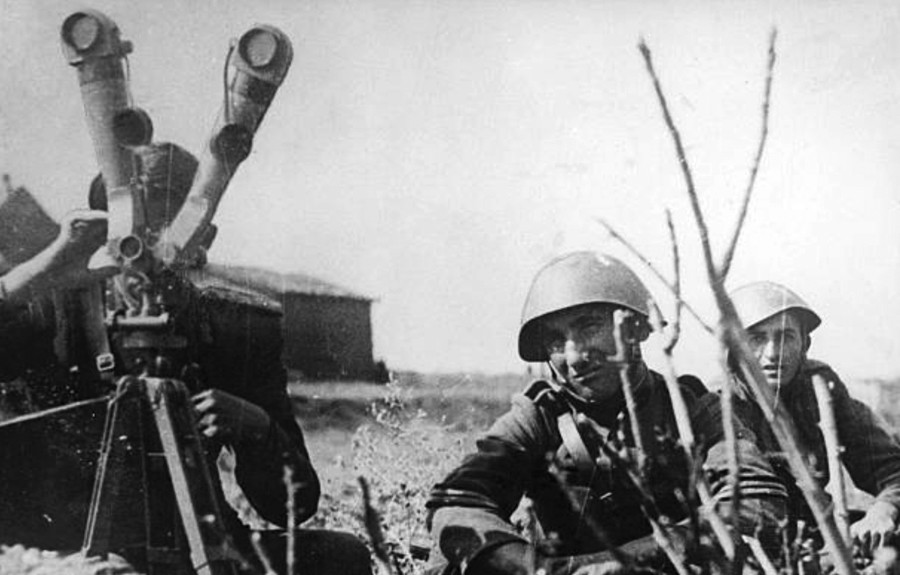 The Epic Victory by Greece-Its Significance

{Stated sadly and bitterly during the Nuremberg trials after WWII, by Hitler ‘s dejected Chief of Staff Field Marshall Keitel: “The unbelievable strong resistance of the Greeks delayed by two or more vital months the German attack against Russia; if we did not have this long delay, the outcome of the war would have been different in the eastern front and in the war in general, and others would have been accused and would be occupying this seat as defendants today”}.

By rendering the first victory to the allies in WWII, Greece proved that the Axis Powers of Hitler and Mussolini were not invincible. Until this point in time, ten powerful European countries had succumbed without any real resistance to the shiny bayonets of the Axis which had made the world tremble and most of Europe to bow. It remained for tiny Greece to remind the rest of the Europeans and the world that there are some things worth dying for. The spirit of the 300 Spartans returned to guide its descendants. In fact, this unexpected Hellenic victory marked the beginning of the end of Hitler’s and Mussolini’s venture to control the world and culminated in their doomed failure and destruction some three and a half years later.

There are two reasons for the delayed historical recognition due to Greece from what has been correctly known by the Greeks as the Greek Epic of 1940. Unfortunately, the delay was first caused by the devastating civil war that followed WWII, which obscured the national priorities for the critical period of 1944 – 1949. The Greek preoccupation was survival from communism’s grip and, as such, the Greeks were neither able to concentrate on the issues, nor to exert the diplomacy required for the post war period. By its immense contribution to the defeat of the Axis Powers, Greece could have been, and, indeed, had a legitimate right to participate in the major conferences with the big powers that decided the fate of the post war geography in Europe. The second reason for the lack of recognition is the apparent short memory and the ungratefulness by Greece’s major allies, especially England, who promised a lot to the Greeks during the war period but conveniently forgot it later. It is obvious now that even the United States government has short memory as well, as proven by its recognition of FYROM as Macedonia.

The Greek contributions were of such magnitude that Greece should have been given not only the Dodecanese Islands but Northern Epirus and Cyprus as well. These lands, besides being promised in many indirect ways by the British and other allies, they were Greek-inhabited territories for 1000s of years, and the Greek inhabitants had fought many times for union with motherland Greece. In addition, Greece should have been able to improve its border line with Bulgaria (making it more defensible by some minor border line changes), and receive additional allied guarantees for its Greek nationals in Constantinople and the islands of Imvros and Tenedos in Turkey.

Italy, Bulgaria and Turkey had been allied or cooperated with the Axis Powers, and had negotiated and received promises from Hitler to divide Greece for their benefit after the Nazis win the war. Numerous non-Greek documents(cited by Spyros Koutsobinas, former Consul of Greece in Washington, in his 1996 review of The Historic OXI (NO) Day, are revealing to this end, and Hitler’s staff concerns about what the Greek victory may have cost the Axis Powers.

The essence of Greece’s contribution to the allied victory is: Due to Mussolini’s humiliating defeat by the Greeks in Albania, Hitler was compelled to capture the Balkans, mainly Yugoslavia and Greece, thusly, delaying his Barbarossa plan to invade and capture the Soviet Union before the winter of 1941. The Greek resistance, both in Albania and in the other famous battle in Crete altered, favorably for the allies, his Barbarossa time table by at least three months (and possibly six). Having at least half of his 9000 outstandingly- trained paratroopers destroyed in Crete was another fatal blow for Hitler; with a decision never to use the paratrooper approach again in the war, for this element of surprise he had hoped to use in the USSR. These elite paratroopers were eliminated by the defending Cretan peasants, who showed no mercy on them during and after landing; to the point that the exasperated Füher said that it is illegal for civilians to fight our soldiers; only to receive the Cretan commentary of “Who says so? This is our country and we have no room for the savage Huns!”

As the Greek gods would have it, winter came early in 1941 and in December the thermometer registered 63 degrees below zero near Moscow. At this temperature, the only weapon that seemed to still be operable, was hand grenades; but it did not make any difference since the Nazi soldiers were dying or incapacitated by the thousands due to freezing. Thus, the war tide had been permanently changed due to the delay of this critical time table, thanks to the heroic Greek victories/resistance and their countless sacrifices. They fought with determination , consistent with the dictates of their history- for God, Country and their Families, regardless of the odds.

When the war was over, there were 10% fewer Hellenes! The nearly million individual sacrifices have formed a new spiritual heaping Marathon Tomb for their nation and the world. The spirit of each victim has spoken again and again through the Nobel Prize Poet Elytis, asking him to tell the powerful of the earth that they must not forget their sacrifice and their country, for they had not died in vain.

The recent book, The Modern Greeks (an AHIF publication by Costas Stassinopoulos and forwarded by his daughter Ariana Huffington), expresses the Greek contribution as follows:

“In a shining moment on the world stage, the Greeks changed the course of history:

As a point of illustrating Greece’s determination and dedication to their country and the allies, the final Greek communiqué to the withdrawing allies before the German invasion, is really admirable and reads as follows: “We are determined to face the Axis by whatever means and sacrifices may be necessary. We shall do our duty to the end as devoted and loyal friends. As a faithful ally, we are determined to go on fighting, even if we have to count only on our own forces”.

{Note: As evidenced by declassified reports that came to light in 1998, Turkey, supplied Germany with desperately needed chromium and delayed allied victory by a number of months and cost countless extra lives. The book, The Evasive Neutral, by professor Frank Weber explains in dramatic detail the stand of Turkey in WWII, which was essentially to help Hitler win the war, who in turn would make Turkey larger and more important by allowing it to get possession of the Greek Aegean and the city of Salonica, and indeed become a power of hegemony in the Balkans. It is ironic that Turkey still craves to accomplish that goal via Greece’s long term ally, our country, the United States!}.

Indeed, the passage of time reveals the real historic facts about the significance of October 28, 1940, and the decisive contribution of Greece to the allies in WWII. The Greek victory in Albania, the battle at the Rupel defense line that the Germans were never able to penetrate, the battle of Crete and the underground heroic resistance that followed is collectively reminiscent of the significance of the decisive battle of Salamis for Western Civilization in ancient times.

We hope, even belatedly, that the Western powers will restore the credit that belongs to Greece. More importantly, they will reward the country of the source of our Western Light by satisfying its legitimate requests for human rights in Cyprus and elsewhere, and by supporting it to safeguard its internationally- recognized borders from the bullies of aggression who violate both US and international laws and misuse NATO-supplied weapons paid by us, the US tax payers. Many of our officials in Washington seem to be captives of the special interests, both domestic and foreign, and a self-serving campaign funding process . As such,, they ignore the essence of civilization, virtue and justice, without which freedom can only be short-lived.