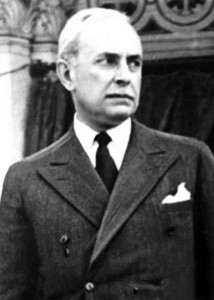 Alexandros Koryzis (Greek: Αλέξανδρος Κορυζής, 1885 – April 18, 1941) was the Prime Minister of Greece who replaced Metaxas after the latter’s death in early 1941, but he is mainly remembered as the prime minister who chose to kill himself rather than surrender the country to Nazi Germany.

Prior to his involvement in the Metaxas regime, he was governor of the Bank of Greece. Born in 1885 on the small island of Poros (where a museum dedicated to his life exists today), Koryzis came from a background of privilege. Both his grandfather and his father were politicians; his father was elected to Parliament three times and served as Poros mayor from 1895 to 1899. But Alexandros’ childhood was also marred by his mother’s death when he was just seven years old.

Koryzis studied law and in 1903, at the age of eighteen, went to work for the National Bank of Greece, of which he became deputy governor in 1928. A year later, in 1929, he founded the Agricultural Bank of Greece and served as its first president.

When Metaxas seized power in 1936, Koryzis was appointed to the Ministry of Social Welfare, a post he held for three years, until 1939. Metaxas’ plan for pensions and health care were extremely popular and Koryzis could take credit for some of that. Nonetheless, in 1939 he resigned and returned to banking, becoming the Governor of the National Bank.

After Metaxas’ unexpected death on January 29, 1941, and with no obvious successor, King George II moved to fill the void by appointing Koryzis premier. Although largely powerless, as the government was effectively controlled by King George II, Koryzis stayed the 4th of August regime’s course.

As the Second World War raged on the North and the Germans poised to attack Greece, the technocrat Koryzis was overwhelmed. On April 6, he rejected a German demand to expel all British forces from Greece, effectively triggering the German invasion and events precipitated. Less than two weeks later, on April 18, as German troops marched towards Athens and the city was placed under martial law, the British met with King George II and the Greek cabinet at the Tatoi summer palace. The British insisted that the Greeks set up a defensive line at Thermopylae – a plan opposed by the head of the Greek forces, Marshal Alexandros Papagos.

Later that day, Koryzis was summoned to a meeting at the Grande Bretagne Hotel where he had a private meeting with the King. Nothing is known about the exchange between the King and Koryzis, although the latter was described as despondent afterwards. Apparently Koryzis left this meeting so upset that the King sent his son to Koryzis’ home to see how he was faring. The crown prince arrived just in time to hear the shots – Koryzis had shot himself through the heart.

His death was presented to the public as a heart attack, probably to avoid causing mass panic in Athens. Although suicide was perhaps a logical choice for an inexperienced leader under the pressure he was experiencing, the circumstances surrounding this suicide have since raised questions. One such circumstance was how he had managed to shoot himself twice in the area of the heart. Another one was why there was no autopsy.

However, foremost the mystery revolved around the mysterious meeting with the King earlier in the day, a meeting that had not gone well at all. It’s certain that King and Koryzis clashed behind closed doors, but the source of their disagreement remains unclear.

Some historians believe that Koryzis had been told that day by the King of his decision to abandon Athens and move his government to either Cyprus or Crete. That would have been discouraging enough for Koryzis. Other historians have speculated about the existence of dramatic cables from the front with references to surrender and treason. Some scholars say Koryzis was unable to persuade the generals to follow the British line; others take the conspiratorial view that Koryzis’ death was not suicide but an assassination by British agents as a lesson to anyone who might considering stepping out of line. The official account in the History of the Army General Command says Koryzis had left the meeting shaken when the King said that he would consider the premier’s proposal for government to be assumed by the military.

Finally, another scenario has the King accusing Koryzis of fraternizing with a woman who was, at the time, having an affair with a spy from the German embassy. If true, it could have been construed as a traitorous act. This theory has him being murdered as a liability. This hypothesis is certainly far-fetched, but not entirely ridiculous because of those two shots. It could also explain why Koryzis was buried with Orthodox rites, which are allowed in case of murder but denied by the Greek Church in case of suicide.

To date, the mystery surrounding the circumstances of Koryzis’ suicide remains.