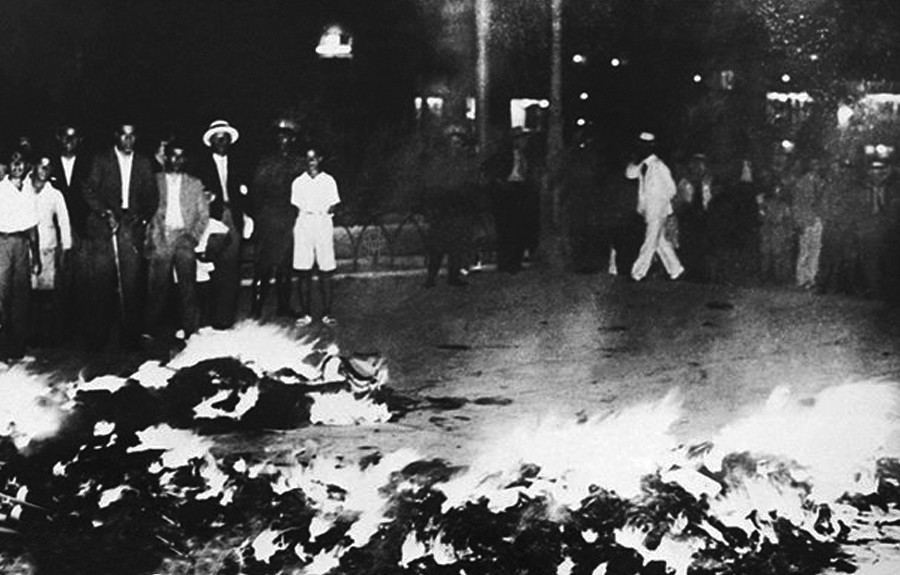 One of the first actions of the Metaxas dictatorship, only twelve days after the abolition of democracy on August 4th, 1936, was to perform massive book burnings in several Greek cities. As an imitation of similar actions in Nazi Germany, hundreds of leftist, communist, marxist and pro-democracy books by both Greek and foreign writers were set on fire in medieval-like ceremonies. 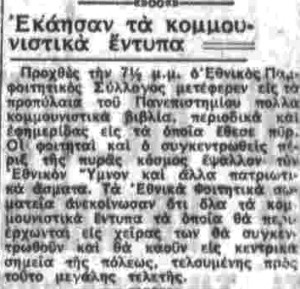 The Akropolis newspaper, on its August 10, 1936 edition, informing about the August 8 book burnings

The first rehearsal took place in Athens on August 8, just four days after the dictatorship was imposed, at the Propylaea of ​​the University of Athens in the city center. According to the newspapers of the time, behind the initiative was a group of “ethnikofronon foititon” (Greek for “nationalist students”), specifically the Ethnikos Pamfoititikos Syllogos, who sang the Greek anthem as the books burned.

But the mass coordinated burnings of “anti-national”, Leftist and Communist books in several cities across Greece took place on August 16, 1936. In Athens, the “feast” took place in front of the Temple of Olympian Zeus and at the Propylaea, while in Piraeus, the books were set afire in Pasalimani (currently called Bay of Zea), where the young locals were invited to participate at the “ceremony”. The announcement read as follows: “The National Student Youth of Piraeus will cremate whole series of communist publications next Sunday at 8 pm. in Pasalimaniou Square in Piraeus. We invite all the young people with National pride, to come to Terpsithea Square, at 7pm to join and participate in the ceremony”. 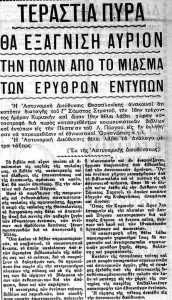 To Fos newspaper: The fire will be enormous by burning red leaflets

But the biggest feast would be set up in Thessaloniki, next to the city’s famous White Tower. The previous day, the now regulated newspapers published an announcement and even headlines: “Tomorrow a huge fireball will purify the city from the scourge of red papers,” the Thessaloniki newspaper “To Fos” stated at the top of the first page on August 15, 1936. 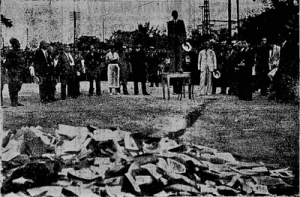 The same newspaper published a statement by the Thessaloniki Police Directorate, which stated: “By order of the 3rd Army Corps, next Sunday the 16th, at 19:00, there will be a destruction of the confiscated communist books and leaflets at the White Tower square, where nationalist organizations are expected to attend”.

The books to be burned, as the newspaper “Nea Alitheia” wrote that morning, had been seized from city bookstores, public and private libraries and other places. The newspapers also published a statement by the fascist EEE organization, which called for right-wing students to attend the ceremony “in order to follow the fuel of the Communist books and publications with which they poisoned the Greek soul, using them in the growing anti-scientific theory of Marx, Lenin, and other invaders and destroyers of mankind.” 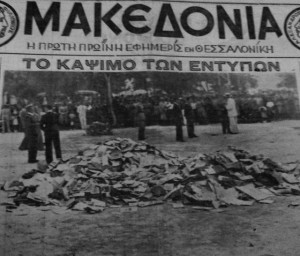 A front-page picture of this burning was published on the newspaper “Makedonia”. In a related report, it was stated that the number of books burned that day in front of the White Tower exceeded 10,000.

Of course, the book titles to be burnt were selected by the 4th of August regime’s subjective perspective ans bias. They even included school books, such as Zacharias Papantoniou’s “The High Mountains”, as well as books whose teaching in schools had been officially banned such as “Antigone” by Sophocles, “The Epitaph” by Pericles, “The State” by Plato, and works by Thucydides and Xenophon. In general, more than 445 book titles were banned by the regime’s censorship.

Many works by young Greek writers at the time were also set on fire, such as “Life in the Grave” by Stratis Mirivilis, works by Andreas Karkavitsas and by Alexandros Papadiamantis, as well as many foreign writers’ titles: the entire collection by Karl Marx, the whole Darwinian theories, works by Sigmund Freud as well as books by George Bernard Shaw, Anatole France, Heinrich Heine, Maxim Gorky, Leon Tolstoy, Fyodor Dostoevsky and Goethe among others.

Although it is unclear whether Ioannis Metaxas himself supported the book burnings or not, the fact is that the events took place during his regime and with the authorization of the police and the 4th of August State apparatus, however incipient it might be in its first weeks of existence.