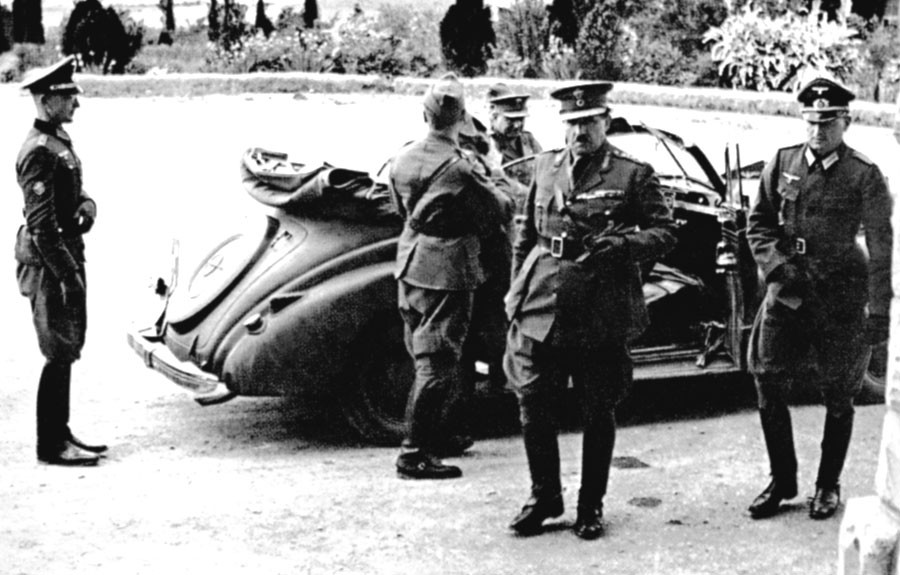 The collaborationist purge of the Metaxas regime

After the Wehrmacht invaded Greece on the spring of 1941, a new quisling Greek government was created in Athens headed by General Georgios Tsolakoglou, the army commander who had signed the armistice with the Germans.

Although Joachim von Ribbentrop, the German foreign minister, had instructed Gunther Altenburg, the newly appointed German diplomatic representative, “to keep matters ticking over and to exclude ‘energetic personalities'”, Tsolakoglou wanted to make an impact and proclaimed that his government was a new political beginning, built afresh after the ‘old’ 4th of August State.

It was only logical that Tsolakoglou would want to make a radical change from the previous government: he blamed the King for the 4th of August dictatorship, he resented Metaxas for having sided with the Allies instead of the victorious Axis and he abhorred the exclusion of the Venizelist officers from the Army by the Monarchists.

Tsolakoglou removed the symbols of the monarchy (the King had effectively fled the country) and turned the “Kingdom of Greece” into the “Hellenic State” (Ellenike Politeia), the original name of the Greek republic from 1829 to 1833. This move was similar to Pétain’s replacement of the “Third Republic” with the “French State” (État Français). In his first proclamations on late April 1941, Tsolakoglou stated that the State drew its power from the people and the will of the Armed forces, the first time in modern history Greece was explicitly defined as a military state.

Tsolakoglou was honest, because the officer corps was the Hellenic State’s backbone. A series of decrees in May to July 1941 sought to use both demobilized officers and officers from other security organs to strengthen the new State, and it is significant that the first cabinet contained six generals and just three civilians.

However, the new collaborationist government could not establish itself unless it got rid of the remnants of the previous Metaxas dictatorship. Using standard police state tactics, the collaborationists began their campaign against Metaxas officials before announcing it publicly, and reabilititated pro-Venizelist army officers who had been removed by the Metaxas dictatorship. The government also prosecuted several of Metaxas’ ministers for alleged corruption and arrested a slew of Metaxist politicians on May 6 and 7, 1941. It formally set up the anti-Metaxas purge on May 13, 1941 with a special court to seize the assets of the guilty and distribute them among war victims. The government also dissolved the massive EON youth movement, purged the Academy of Athens and sacked the Athens University professors who had been appointed by Metaxas along with leading judges.

By doing so, the new quisling government beheaded the Metaxian hierarchies in both the political, the military, the judiciary and the academic spheres. The actions against the 4th of August regime, which had lost popularity after Metaxas’ death in January, were also Tsolakoglou’s bid to gain popular acclaim and support among Greeks, although he retained Metaxas’ nationalism, anti-communism, and his security services.

Tsolakoglou used the apparent invincibility of Germany to strengthen his hand and as an alibi to enact these changes. Already in May 1941, when taking soundings from established politicians, Tsolakoglou told Ioannis Politis, a retired diplomat, that Greece had to align itself with Germany and make domestic reforms to please Hitler. Tsolakoglou expressed similar sentiments in his order of the day to the defeated and demobilized Greek army on May 6, 1941, praising German National Socialism and calling for accommodation to the Nazi”New Order”.

The collaborationist government retained its military character until April 6, 1943, the second anniversary of the invasion, when a new prime minister, this time an experienced politician, Ioannis Rallis, allocated more civilians in his cabinet. Rallis, an old acquitance and personal friend of Ioannis Metaxas (in 1935 he campaigned with Ioannis Metaxas and Georgios Stratos as a candidate of the Freethinker’s Party), also restored many purged personalities of the pre-occupation Metaxas regime, thus reverting Tsolakoglou’s previous actions.