The defence strategy of the Metaxas regime: Armed neutrality 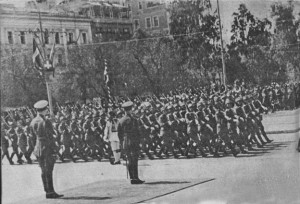 The policies of the 4th of August regime aimed to stabilize Greece and to protect the state from internal and external threats. Though Metaxas pursued a foreign policy of neutrality, he realized that, given Greece’s strategic position, neutrality would be virtually impossible to maintain in the event of another major European war.

Even if the Great Powers were willing to leave Greece alone in the case of a war, Metaxas worried that Bulgaria – bitter from the outcome of the Treaty of Neuilly in 1919 and its resulting loss of territory and disarmament – would seize the first opportunity to attack Greece.

Given that the events of the Great War and the failure in Asia Minor were still fresh and that the policy of neutrality provided no guarantee of security, Metaxas sought measures that would not only provide Greece with political stability but also ensure that it had the military resources needed to fend off a potential attack. He realized that if Greece were to survive as a sovereign state, it would have to rely on its own defenses.

Despite the 1930 Ankara Treaty that allied Greece with Turkey and the subsequent Balkan Entente with Yugoslavia and Romania of 1934, intended to check future Bulgarian aggression, Metaxas created a defense line along the Greco-Bulgarian border composed of forts and anti-tank obstacles.

In addition to building the Metaxas Line, the regime also encouraged the creation and expansion of munitions plants and facilities for servicing aircraft, with a view to the rearmament of the military.

Special subsidies and protective tariffs were created to aid the development of Greek munitions and related industries. From 1936–1939, more than one third of Greece’s total state expenditures were dedicated to defense. The Greek historian Papacosma attributes the industrial growth in Greece in the late 1930s to Metaxas’ emphasis on expanding Greece’s armaments industry capabilities and the objective of making Greece more self-sufficient in this area during a period of rising international tension.

Metaxas believed that there would be another European war. The direction of such a war would be unpredictable. Given such uncertainties, Metaxas wisely sought to solidify Greece’s economic and military position and to keep Greece out of all foreign entanglements.

Metaxas had no faith in the League of Nations and the notion of collective security. He believed that the League of Nations was focused on the interests of the Great Powers and provided little security for countries like Greece. Metaxas came to realize that this goal could only be achieved through a policy of armed neutrality.

On 4 August 1940, one year after the beginning of the Second World War, an Italian invasion of Greece appeared to be inevitable as the Italians attempted to gain control of the Aegean. In a national broadcast, Metaxas stated: “…in this terrible conflict that shakes the very foundation of Europe, Greece, always ready for every sacrifice to safeguard the integrity of her territory, her independence and her [honour], should these precious possessions be threatened, remains and will remain neutral.”

Greece’s neutrality and desire to keep out of the Second World War remained intact even eleven days following this speech, when an Italian submarine sunk the Greek cruiser Elli.