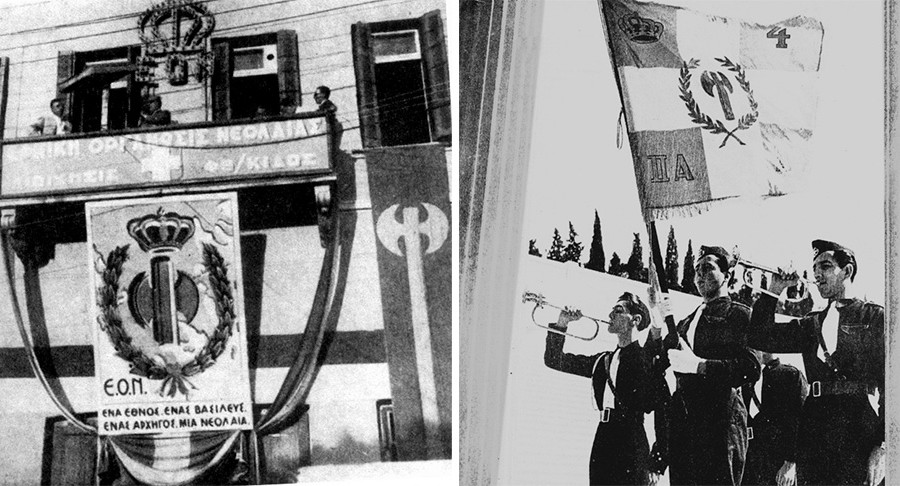 The Labrys/Pelekys axe: The symbol of Thundergod Zeus and of the EON

One of the main symbols of the Fourth of August regime was the labrys. The labrys is the double-headed axe, known to the Classical Greeks and to modern Greek speakers as pelekys (πέλεκυς). Metaxas chose the labrys as one of the principal symbols for his regime because he believed it to be the oldest symbol of all Hellenic civilizations.

Coincidentally, in 1963 the oldest artifact ever to have been found in Greece was unearthed in Paleokastro, an old settlement near Siatista (a town in northern Greece), and it was the “pelekys of Siatista”. It is a double ax made of greenish trachite that experts date as early as 100.000 years bC. 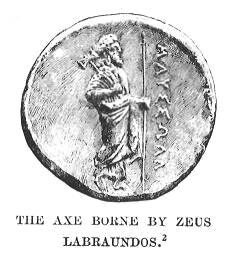 Beyond this coincidence, the fact is that the labrys or pelekys is widely found across Hellenic territories and throughout Hellenic history. It has been found in Neolithic finds in Greece and other parts of Europe, continued to appear in the ancient Minoan civilization in Crete, in ancient Greek relics in continental Greece and in ancient Greek mythology through the medieval Byzantine empire until Metaxas’ days and today.

The labrys is an archaic symbol of the thundergod Zeus. Storm gods wielding their thunder weapons are familiar motifs in Indo-European mythology. Examples are the Nordic god Thor, who hurls his mjollnir to cast thunder and lightning upon the earth, or Indra, who uses his favourite weapon the vajra. Similarly, Zeus throws his keravnos to bring storm. The labrys, or pelekys, is the double axe Zeus uses to invoke storm.

“Many points go to prove that the double-axe is a representation of the lightning (…). The worship of it was kept up in in the Greek island of Tenedos and in several cities in the south-west of former Hellenic Asia Minor, and it appears in later historical times in the cult of the thundergod of Asia Minor (Zeus Labrayndeus). An impression from a seal-stone shows the double-axe placed together with a zigzag line, which represents the flash of lightning” (Chr. Blinkenberg, The thunderweapon in religion and folklore; a study in comparative archaeology, 1911: 19).

Greek testimony with regard to the double axe goes back to the Minoan epoch.

“The double-axes (…) are placed on pillars encircled with foliage, probably a representation of the trees struck by lightning (…). The axes have a double edge on both sides, a characteristic which they have in common with many other representations of sacred axes (…) (Hagia Triada, Crete) Paribeni regards these axes as a kind of perspective rendering of axe-blades set crosswise with edges pointing to the four corners of the earth. On a sarcophagus in Crete the double-axes are yellow with black stripes… on one particularly well-drawn picture of such a double-axe there is a zigzag line between the sloping lines (Knossos).” ( Chr. Blinkenberg, The thunderweapon in religion and folklore; a study in comparative archaeology, 1911: 22)

The word “labrys” first appears in Plutarch as the Lydian word for axe (Greek Questions, xlv):

“Herakles, having slain Hippolyte and taken her axe with the rest of her arms, gave it to Omphale. The kings of Lydia who succeeded her carried this as one of their sacred insignia of office, and passed it down from father to son until Candaules. Candaules, however, disdained it and gave it to one of his companions to carry. When Gyges rebelled and was making war upon Candaules, Arselis came with a force from Mylasa to the assistance of Gyges, slew Candaules and his companion, and took the axe to Caria with the other spoils of war. And having set up a statue of Zeus, he put the axe in his hand and called the god, “Labrandeus,” labrys being the Lydian word for ‘axe’.” (Λυδοὶ γάρ ‘λάβρυν’ τὸν πέλεκυν ὀνομάζουσι 2.302a.)

Lydia was an ancient kingdom of Asia Minor, known to Homer as Mæonia. Homer speaks Maeonians at the Illiad (Iliad ii. 865, V. 43, 11. 431). The Lydians were a people inhabiting the former Hellenic territories of Asia Minor; and one of the main sites of their ancient realm is found at Labraunda, where Zeus Labrandeus was venerated. Plutarch reports about this cult, and it is widely accepted that the word “Labraundeos” means in archaic Greek “shining” or “bright”. As the Greek god of thunder, the main feature of Zeus was the lightning, which of course is shining, which would be meaningful. “Labraundeos”, in fact, could be an epytome for “shining god”, since “labry” means “shining” (λαμπρό [lambro] still means “bright” in modern Greek) and “deos” is an ancient word for “god”, cognate with modern Greek “theos” (as in “theocracy”, “theology”…). 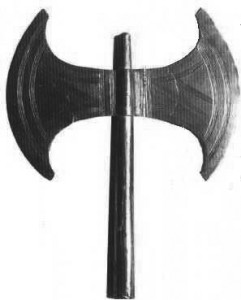 The Lydians were related to the Cretan Minoans. In fact, the most widespread use of the labrys or pelekys is found in Crete, where the Minoan civilization -the first Hellenic civilization ever to take place- appeared. The Minoan civilization reached its peak in the 2nd millennium BC. Some Minoan labrys have been found which are taller than a man and which might have been used during sacrifices. The sacrifices would likely have been of bulls. In fact, on Greek vase paintings, a labrys sometimes appears in scenes of animal sacrifice, particularly as a weapon for the slaying of bulls. On the “Perseus Vase” in Berlin (F1704; ca 570–560 BC), Hephaestus ritually flees his act of slicing open the head of Zeus to free Athena: over his shoulder is the instrument he has used, the double-headed axe (additionally, it is interesting to notice that the more usual double-headed instrument of Hephaestus is the double-headed smith’s hammer). On Greek coins of the classical period (e.g. Pixodauros, etc.) a type of Zeus venerated at Labraunda in Caria that numismatists call Zeus Labraundeus stands with a tall lotus-tipped sceptre upright in his left hand and the double-headed axe over his right shoulder. 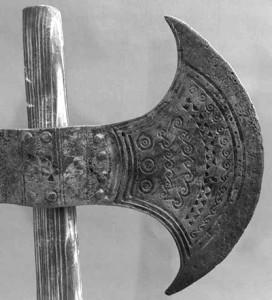 Stylized double axes consecrated shrines in ancient Cretan homes and palaces. In the famous Minoan palace of Knossos in Crete, there is the “Hall of the Double Axes”, taking it name from the frequency of this symbol therein. Not only does the sacred axe occur as a more or less crude engraving on the stone blocks composing certain pillars in the palace, but little models of it were found associated with an altar, and, in the Dictaean cave, some miles distant, several bronze specimens of the axe were discovered in circumstances which show that they were votive offerings. Sometimes the sacred symbol was set up on a socketed pedestal. Full sized double axes were used by priests to kill sacrificial bulls in ceremonies to propitiate Zeus. The labrys or pelekys, like the thunderbolt, represents lightning and Zeus for that sake.

Also in continental Greece, German archaeologist Schliemann, during his researches at Mycenae on the Greek mainland, unearthed from one of the graves an ox-head of gold plate, with a double axe between the upright horns (maybe a symbol of the bull). Lest we forget, in mythology Zeus takes the shape of a bull to abduct princess Europa.

Metaxas adopted the pelekys, labrys or double axe as the main symbol of the EON, the Εθνική Οργάνωσις Νεολαίας [Ethniki Organosi Neolaias] (the fascist Greek Youth Organization), the Greek equivalent to German Nazi Hitlerjugend. A song of the EON praised the Greek falangists with these words:

The symbol was however also used outside the strict boundaries of the regime’s youth organization.