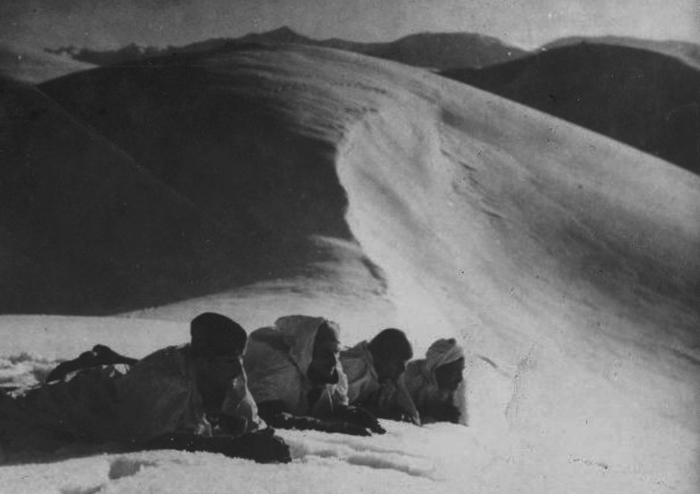 In the cold winter of 1940-41, the Greek Army, leaded by General Ioannis Metaxas, defeated the several times bigger Italian army in a military conflict which is now only a footnote in many history books, but one that had a dramatic effect on the Second World War’s course.

The underlying cause of the conflict was Mussolini’s plans to create a “New Rome” – an Italian-controlled Empire in the Mediterranean. The Duce’s plans included incorporating Greece, or at least a part of it, as a protectorate as he had done it before with Croatia’s Dalmatian coast and Albania.

The hostilities started when the Italian ambassador in Athens, following previous Italian provocations that had consciously been uncontested by Greece (including the torpedoing and sinking of a Greek ship just a throw stone away from a Greek island), delivered an ultimatum to Prime Minister Metaxas. The letter requested him to allow Italian troops to occupy strategic locations on Greek soil. These spots, Mussolini claimed, would ensure Italy’s safety against any English incursion. If refused to do so, Italy would attack Greece.

Prime Minister Metaxas’s resounding answer to the ultimatum, the records say, was worthy of the one Leonidas, the King of the Spartans, had given the Persians two thousand and five hundred years earlier when prompted to give his weapons: “MOLWN LAVE!” (“COME AND GET THEM!”). It was also worthy of the reply Konstantinos Palaiologos, the last emperor of the Greek-Byzantine Empire had given the Ottoman invaders in the late Middle Ages when asked to surrender Constantinople, the Empire’s capital city: “ELATE NA THN PARETAI” (“COME AND TAKE HER”).

Metaxas’ simple and straightforward response was OKHI – NO.

Few hours later, on a speech broadcasted to the nation via radio, he called Greeks to take arms with these words,

«Greeks, the time has come for Greece to fight for her independence. Greeks, we now must prove worthy of our ancestors and the freedom they gave us. Fight for the Fatherland, for your wifes, for your children and for the sacred traditions. Now, above all, FIGHT!»

That was October 28th, 1940, the day Italy attacked Greece. At that time, most observers expected an easy and smooth Italian victory over the far smaller, and less prepared Greek army. However, the Greeks fought the invading Italians in an epic struggle, the outcome of which can only be called miraculous. 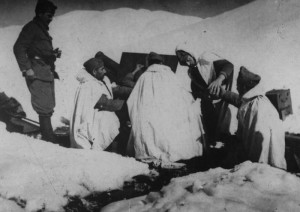 The Greco-Italian war was waged in the remote, scarcely inhabited, snow-covered mountainous region of Epiros, around the Greek-Albanian frontier. To make things worse, with December 1940 came to Greece one of the coldest winters recorded in the century, which held its grip until March. In the upper parts of the mountains temperatures dropped to -20ºC. The blizzards were ravaging, and the mist covered the mountains almost permanently. Frostbites became a common occurrence, and amputations were applied in great numbers among frozen frontliners. Also because of the icy weather conditions, in just two months, over half of of the Greek Army’s animals had perished of hypothermia.

The atmosphere was almost Arctic. The Italians were not prepared for war in such a extreme condition, and considered pulling out units comprised by soldiers from Italy’s warmer Southern regions, and replacing them with units manned by soldiers from the Northern parts of the country, as they were supposed to be better prepared for the harsh cold. 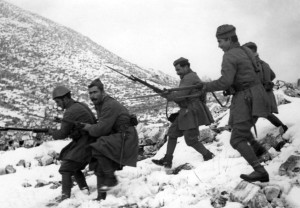 In this context, the Greeks showed better adaptation to the environment and superior skills in mountain warfare, constantly outmanoeuvring and outflanking their enemy. For instance, for a few weeks time, 27 Italian divisions were pinned in Albania by 16 Greek divisions. And, by the end of 1940, the Greek prowess had brought the Italians thirty miles back into Albania, the headquarters the attack had been launched from.

By then, Greece and Great Britain were the two only countries in Europe waging war against the Axis and actively resisting it, so the outcome of the Greek front was critical. The entire world was looking – holding its breath and watching the small and proud Greece resist on its own, without substantial Allied aid for 160 days, against the many times larger fascist Italy. Indeed, for as much as four months and despite many repeated attempts, the Italians failed to ever seize any considerable Greek territory. This failure was crowned by the resounding collapse of the so-called ‘Spring Attack’ in March 1941, which was to be the largest attack enacted by the Italians until then. This final offensive was supervised and coordinated by Mussolini himself, who travelled to the front for this specific purpose. However, this ultimate attack also turned out to be a military fiasco, and Mussolini returned beaten and humiliated to Rome.

Not only Greece was victorious in her struggle against Italy, but the Greek Army, in its incursion in Albanian territory, also liberated Northern Epirus, the historically Hellenic territory which was home to a Greek ethnic population. The Greek Army was received with joy in this long oppressed region and the alliberation sparked celebrations all across Greece. For once, it seemed that these territories would be incorporated into mainland Greece – Greeks were triumphant. 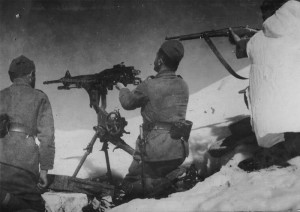 Much of the credit of Greece’s heroic victory against the Italian army should be attached to General Metaxas, the awarded general and prime minister who led the resistance. He had an extended and succesful military experience – he had studied in the prestigious Prussian War Academy in Germany, had fought in the 1897 Greek-Turkish war, and had emerged as a war hero on the 1912-13 Balkan Wars.

The Greek military victory proved Metaxas’ skills on military strategy and raised him as one of the greatest defensive tacticians since the time of Leonidas. But the conflict also proved that Metaxas was also an exceptionally astute stateman, since he had long calculated that the greatest foreign threat to Greece’s territorial integrity was Italian expansionism. For this sake, he and his cabinet had prepared the Army and the Nation in general for a war eventuality.

Besides his credentials as a general and as a statesman, Metaxas should also be credited for having projected a powerful spirit of patriotism, heroism and sacrifice to his fellow Greeks. In fact, one of the most important factors for Greece’s victory was not the Greeks’ material preparation, but their dedicated and uncompromised will to defend their country, whatever the circumstances. This mindset was indeed the Greeks’ greatest strength. The Italian invasion brought the Greeks together as never before, and Metaxas also succeeded in rallying all of them behind him to undertake their responsibilities and obligations towards their country.

Metaxas, however, tried to discredit himself of the military and national success and attributed it to fonder reasons, entailing that he had only channelled the innate Greek warrior-spirit and patriotism. In fact, on his nameday on 7 January 1941, after being praised by enemies, political opponents, followers and supporters alike, he responded:

“All this is not my doing, but that of the Greek people, who always stood up true to their tradition, so long as they were united and disciplined, rather than slavish blind political followers. Under these conditions, the divisions of the past -factionalism- made these virtues disappear, so all my efforts from the beginning -when I assumed power- were directed at recovering these virtues, so that the Nation would be psychologically ready for the 28th of October”.

Greece’s victory over Italy was the first victory on the Allies’ side in Second World War. In fact, the epos of 1940, as this monumental triumph is known, was an inflection point that showed that Axis defeat was a possibility. Thus the Greek victory contributed decisively to the final Allied victory against the Axis not only militarily but also morally.