The EON at the “Freude und Arbeit” exhibition in Bucharest, 1939 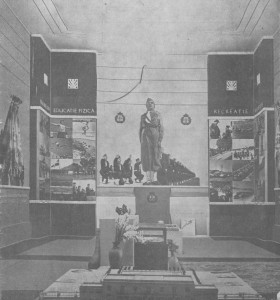 In early Summer 1939, the Greek fascist youth EON participated at the Joy and Work (“Freude und arbeit”) exhibition in Bucharest, Romania. “Freude und Arbeit” was a Nazi-sponsored program leaded by Dr. Robert Ley, the head of the Deutche Arbeitsfront, to project National Socialist propaganda outside the borders of Nazi Germany. It was the also the name of a magazine issued by the “Internationalen Zentralbüros Freude und Arbeit”, as well as of a yearly exhibition. 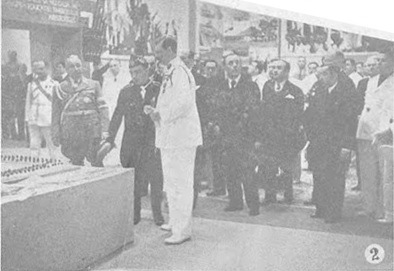 The EON had its own booth, designed to explain the organization’s aims and activities. The interior walls ware painted by Thanos Makris, and there were 40 flags of different formations of the EON hanging from poles on the walls. There was a maquette of the prototypical “Ioannis Metaxas” youth camp, as well as samples of diplomas, medals, etc. issued by the EON. 100 boys and girls from the Greek community of Bucharest were lined up in front of the EON booth.

A number of celebrities visited the booth, among them the king of Romania Carol II and the Romanian minister of Work. A representative of EON, Kapsalis explained the boot to King Carol. Among the other visitors to the EON booth was Teofil Sidorovici, the leader of the Romanian youth Straja Țării. The Straja Țării was a paramilitary youth organization created in 1935 in Romania by King Carol II to counter the growing influence the Iron Guard had over the youth of Romania. 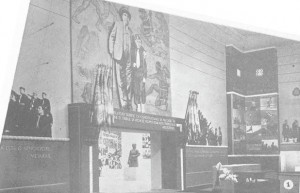 Its members were known as străjeri (“sentinels”), and used a form of the Roman salute as greeting. In some ways, it was the Romanian equivalent to the EON. Mr. Sidorovici was gifted with an artistic reproduction of the EON emblem.

The exhibition was an opportunity for the 4th of August regime to strengthen ties with the Greek community of Romania. Indeed, the EON’s governor, Alexandros Kanellopoulos, the Greek ambassador in Bucharest, Mr. Kountouriotos, as well as the president of the Greek community in Romania, Mr. Romas, spoke at the school to an audience of Greek-Romanian children. There were also a number of acts of friendship and comradeship between Romania and Greece – two friend nations of Orthodox faith which at the time were living similar circumstances, since both of them had a far-right dictatorship under the blessings of the King.