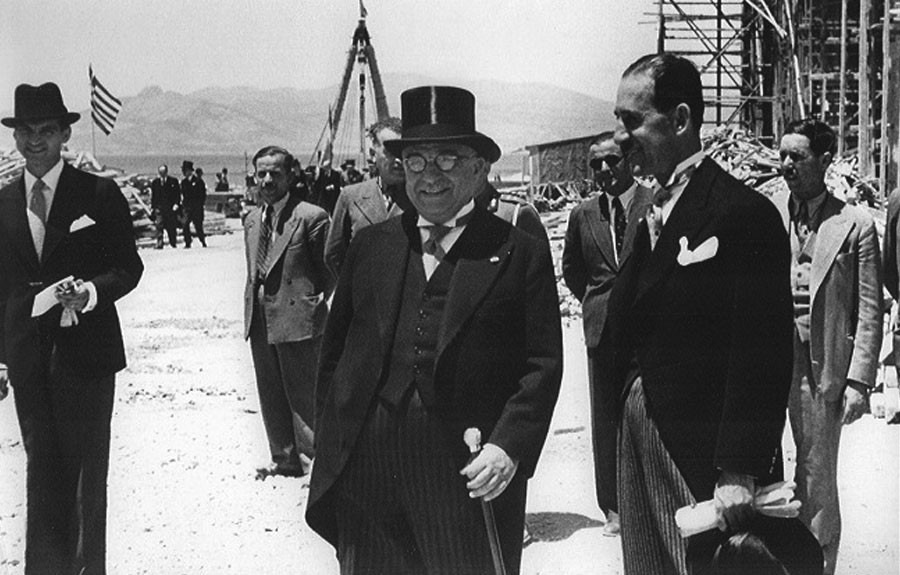 The Greek arms industry under the 4th of August regime

One of the main drivers of the economic boost the Greek economy experienced under Metaxas was the armaments industry, which became Greece’s biggest industry and second largest export.

At the center of this industry was the GPCC, the Greek Powder and Cartridge Company also known by its name in French – Poudrerie et Cartoucherie Hellenique. Under the guidance of Prodromos Bodosakis –an entrepreneurial genius–, the GPCC and the Greek arms industry as a whole made great profits by selling arms to Spain during the Spanish Civil War (1936-1939).

Shortly after the war commenced, Bodosakis, a close acquaintance of Metaxas, saw the conflict as a way for his company and the government to make a profit. Greece’s policy of neutrality enabled her to sell munitions to both sides of the Spanish Civil War (the Nationalists and the Republic) regardless of their ideology, so the opportunity was huge.

In fact, it can be said that by selling arms to the left-wing Republic, the Metaxas regime definitely placed its economic and defense interests ahead of its anti-communist ideology. Metaxas adopted a pragmatic approach, since he believed that these sales would provide the Bank of Greece with much-needed funds and help him modernize Greece’s military before the looming war that the Archigos was anticipating.

Due to the quantity of weapons shipped to Spain via Greece, the production capacity of the Greek armaments industry was expanded. For instance, from 1936 to 1939 the GPCC created over 2,000 jobs and opened up a number of weapons and ammunition factories in Athens and Piraeus. The factories in Ymettos, Daphne, and Eleusis were considered to be the most important. All of them had a vast array of production lines.

The Ymettos factory, for instance, was equipped to produce a wide variety of munitions daily. The factory also had a machine shop which, according to American economist Henry Hill, was the largest of its kind in the eastern Mediterranean. The shop had the latest equipment and manufacturing tools needed by the GPCC factories. It contained “gauges and calibers, lathes, crane bridges, pumps, rifle breeches, rifle barrels, boilers, motors, precision machinery for the construction of cartridges, also filling and controlling machinery.” It also had a ‘carpenters’ shop’ which made the packing cases for the ammunition. The factory employed 7,500 workmen over three shifts.

Journalist Frank Gervasi asserted that the involvement of the Greek arms industry in the Spanish Civil War had considerable impact on the Greek economy. “One year of operations brought into the strongboxes of the Greek government a total of six million dollars gold in profits. To a country like Greece, perpetually in need of foreign exchange and particularly of yellow metal, it was a major strike, somewhat as though the government has suddenly found a gold mine right under the treasury building”, Gervasi wrote.

The Metaxas regime also made great profits by selling German-made weapons, again to both sides of the Spanish conflict. Greece was bound by the Schacht plan, which forced countries selling products to Germany to use the German marks they obtained to buy from Germany only. Greece sold tobacco and other agricultural products to Germany, and the currency it obtained could only be used to purchase German goods. While on the surface it may seem that the Schacht plan was oppressive, the Metaxas government was able to use the situation to their advantage. Not only did it enable Greece to readily obtain weapons from Germany but it also promoted the development of the Greek munitions industry.

The Spanish Civil War wasn’t the only conflict to make profits from. In 1938, the GPCC and Greece as an exporter diversified its arms sales to Chiang Kai-shek’s forces in the Chinese Civil War, and shortly before the 1940 invasion of Greece, the GPCC had begun to supply the British Army with rifle cartridges and shells.

Bodosakis stated that the profits that the GPCC made from these activities were used for the renovation and expansion of armaments facilities, which would later play a significant role in the Greek defense against Axis aggression. According to Hill, the GPCC “…supplied the Greek army with its full requirements during the war with Italy” and, at the time of the German occupation, the company had an estimated $30 million worth of raw materials and finished products on hand. The amount of ammunition that Greece possessed was enormous. When the Germans entered Athens on 27 April 1941, they captured “several thousand tons of ammunition.”

The importance of the Greek arms industry continued long after the Spanish Civil War. As a result of its growth and devopment during the Metaxas years, the GPCC was able to become a major supplier of munitions worldwide. For instance, in 1948 Greece diversified its sales to Romania and Turkey. Following the conclusion of the Greek Civil War in 1949, the GPCC continued to supply weapons abroad. It supplied the Greek Cypriots in 1965 and attempted to sell roughly a billion dollars of weapons to Libya in 1985. In the 1980s, the GPCC, renamed Pyrkal, repeated history when, with the backing of the Greek Defense Ministry, it supplied weapons and ammunition to both sides in the Iran-Iraq War (First Persian Gulf War) for a “large profit.”