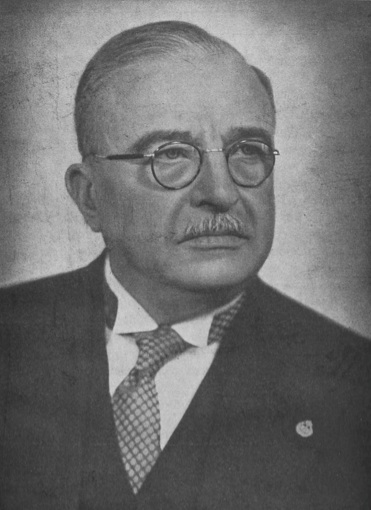 Ioannis Metaxas is among the most prominent personalities in modern Greek history, but outside Greece he is quite an unknown figure. What follows here is a short biography of Metaxas, intended to be a quick overview of him and certainly not an indepth article.

Ioannis Metaxas was born in the legendary island of Ithaca but spent his youth in Kefalonia, Greece, an island in the Ionian Sea, and always considered himself a Kefalonian.

A career soldier, he entered at an early age the Scholi Evelpidon, the Greek Military Academy, where he displayed a talent for soldiering and strategy, graduating at the top of his class in 1889. His abilities as a young field officer in the brief and disastrous Greek-Turkish war of 1897 impressed his Commander-in-Chief, Crown Prince Constantine (later King Constantine I) enough to suggest that he attend higher military science at the German Kriegsakademie in Berlin.

There he proved to be extraordinarily competent in almost anything handed to him – mechanics and chemistry, art and literature, philosophy and battle tactics. By the time he graduated, his awestruck professors avowed that no problem was insoluble for ‘den kleinen Moltke’ –‘little Moltke’, a reference to the legendary General Helmuth von Moltke, the chief of the Prussian general staff and architect of victory in the Franco-Prussian War in 1871.

Back in Greece, he served again in the Balkan Wars of 1912-13, in which he was assistant chief of the general staff. Thanks to his distinguished service, Metaxas rose in the army hierarchy and became chief of staff, but was exiled in 1917 to Italy, along with other prominent figures of Constantine I’s government, because he was pro-German while Greece was instead joining the Allies in World War I.

He returned in 1920 and became prominent as a royalist politician during the turbulent 2nd Hellenic Republic (1924-1935). After monarchy was re-established in Greece, Metaxas became premier in April, 1936. Arguing that unending Communist protests were putting the country’s law and order in peril, he dissolved the Parliament with the support of King George II and established an authoritarian regime with fascist leanings on August 4th, 1936. Hence the name of his regime.

Metaxas’ grandiose vision was to lay down the foundations for a so-called ‘Third Hellenic Civilization’, which was to be heir of two glorious episodes of Greek history: ancient Greece and the Greek empire of Byzantium in the Middle Ages. Whatever his intentions, what he actually created was more a Greek version of Nazi Germany. An hyperactive man, in only 5 years he implemented hundreds of social, industrial, administrative and economic reforms.

He placated unrest in the working classes by establishing holidays with full pay, maternity leave, a five-day and 40-hour workweek, the 8-hours workday, stricter work safety standards, introduction of a minimum wage, mandatory paid leaves, banning child labour, establishing Sunday as restday, and building child care centres, among other initiatives. He also set up Greece’s first social security system, the Social Insurance Foundation (IKA) which to this day provides most Greeks with their medical coverage and pensions. He also ignited great infrastructure works (telecommunications, railways, hospitals, roads, land drainages) and the industrial and agricultural sectors boomed. He did so while defusing the tumultuous political situation of the country, although with the use of brute force and of harsh, undemocratic measures.

Having managed to stabilize the economy, he engaged himself in an intensive diplomatic activity with foreign countries and especially with those in the vicinity. As a curiosity but also as a remarkable trait of his personality, Metaxas, despite being regarded as a conservative (which he wasn’t), favoured demotiki, the folkish dialect of the Greek language. In order to breed a new generation of Greeks moulded to create his ideal ‘Third Hellenic Civilization’, he created in November 1936 the EON, the National Youth Organization, conceived as a “national political aristocracy”.

His feats were many, but Metaxas is remembered today chiefly for his reply to Mussolini’s request to allow the Italian army to cross Greece at the beginning of WW2, thus maintaining Greece’s policy of strict neutrality. The Italian ambassador to Greece, Grazzi, had visited Metaxas in the middle of the night of October 28, 1940, and had handed to him Mussolini’s ultimatum. The Italian Duce was demanding his troops to occupy Greece throughout the war claiming that such positions would ensure Italy’s safety against any English incursion. If refused to do so, Italy would attack Greece. Metaxas response, expressing the wish and the spirit of the Greek people, was simple and worthy of the one Leonidas, the Spartan King, gave the Persians 2,500 years earlier: “MOLWN LAVE” (Greek for “COME AND GET ME”). It was also worthy of the one Konstantinos Palaiologos, the last Byzantine emperor of Constantinople gave the Ottoman Turks when asked to surrender the city 600 years earlier: “ELATE NA THN PARETAI” (Greek for “COME AND TAKE HER”).

Metaxas response was “OKHI (Greek for “NO”).

The Italians then attacked Greece but Prime Minister Metaxas, who also was both Minister of the Armed Forces and Minister of Foreign Affairs, had been long aware that the greatest foreign threat to Greece was Italian expansionism, and had previously prepared the Army and the Nation in general for a war eventuality. After Mussolini’s attack, Metaxas personally took command of the Army, leading and organizing it in such an efficient way that the Greek army, being several times smaller and weaker than Italy’s, defeated the Italians. The Greek army brought them humiliated back to Albania, the Italian headquarter from which the attack had been enacted. The victory proved Metaxas’ skills on military strategy and raised him as a new, contemporary Leonidas among his fellow Greeks. In fact, at this time, and for the first time of his life, he enjoyed a popularity among his countrymen that he had never managed to have before.

It was during his succesful leadership of the military operations against the Italians that Metaxas died. It was a mysterious death, and some rumours at the time circulated inticing that he was in fact assassinated by the British secret service because he had refused the British to intervene in Greece. In fact, after his death, the pro-British King replaced Metaxas with Alexandros Koryzis, a man of less resilience who eventually agreed to allow British forces to enter Greek soil. Koryzis would commit suicide the day after. The fact is that Metaxas died as a true national hero in the purest Greek tradition, as a modern chieftain leading his fellow men to defense the Fatherland. Whatever the cause of his death, Metaxas’ decease meant that Greece lost one the greatest men in Greek history since the Independence War in 1821.