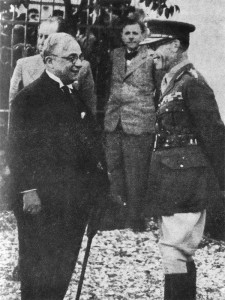 In Belgrade last fortnight a German medical specialist boarded a fast Greek military plane for Athens. The chief surgeon of the British Mediterranean Fleet was rushing simultaneously in the same direction. Both were bound for the bedside of Greece’s Premier, General John Metaxas. Both arrived too late.

Only after his death did Greece announce that for two weeks its stocky little 69-year-old Premier-Dictator had been fighting for life. A tonsillectomy on January 18 was followed by blood poisoning and finally uremia. When three blood transfusions failed to revive him, a destroyer was dispatched to the Island of Tinos for the miracle-working Holy Icon of the Virgin which 25 years before had been brought to the bedside of King Constantine.

To a nation unaware that its leader was even ill, King George II proclaimed: “John Metaxas, who for five years governed my country at my side with adroitness and self-sacrifice, who placed his stamp upon the nation by his luminous intellect, his productive energy, who gave new life to the national feeling and stood up courageously against the enemy’s calumnies, has left our midst to take his place in the chorus of illustrious figures of Greek history.”

Life for “Little John” Metaxas had more ups & downs than a scenic railway. At the Potsdam Military Academy (Germany’s West Point), where he wore high heels to increase his height, his brilliance in solving strategy problems earned him the nickname “Little Moltke.” From school he plunged into that prelude of World War I, the Balkan War. When war exploded throughout Europe two years later, he supported the pro-German faction in Greece so vehemently that when Greece finally chose her side, he was escorted aboard a seedy freighter and carried to Corsica as prisoner of the French.

Back home after the war, he plugged for restoration of the Schleswig-Holstein-Sonderburg-Glücksburg monarchy. George II, living in genteelly poor exile, had indicated his willingness to take his old job back and restoration fever grew. Little John glimpsed victory, but at the last moment powerful old General George Kondylis neatly elbowed him aside, brought George back to the throne, and himself became first commoner. Only a falling out between George and the General, followed by an opportune death, finally dropped the plum of premiership into Little John’s lap in 1936.

Backed by seven parliamentary votes, opposed by 293, he could not risk an election, and prevailed upon George to proclaim martial law and dissolve Parliament. In the face of violent public wrath the King argued, “Little John gets things done,” and slipped off for a fortnight until his new premier had proved his mettle.

“Sparta, not Athens, is our model,” proclaimed Little John, but he took political cues from Berlin and Rome. He ruthlessly abrogated all civil liberties and constitutional guarantees, created a secret police and nazified youth organization, filled prisons and concentration camps with political opponents, drove hundreds into exile, purged others with liberal doses of castor oil. Public performance of classical dramas extolling freedom was prohibited and Pericles’ funeral oration was banned in schools.

He spent the Kingdom’s money to build an Army on the Prussian model and to maintain a police force large enough to inspire love of government in the nation. In his Cabinet he made himself Premier, Minister of Foreign Affairs, Minister of War, Minister of Marine, Air Minister, Minister of Education. In 1938 he proclaimed himself “Premier for life.” But unlike the Axis dictators, he fomented no wars, rarely made speeches, indulged in no pageantry, maintained no sycophants to shout his praises. He sought friendship with all his Balkan neighbors and cemented a cordial entente with Greece’s traditional enemy, Turkey. He was a hardheaded, hardworking, unpretentious administrator in shell-rimmed spectacles who rested his claim to authority on the fact that he got things done. 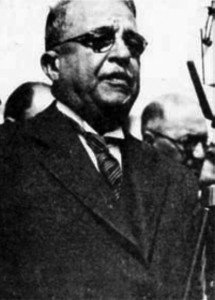 He was content if the Greek people called him “Uncle Johnny.” He saw in Italy and Germany congenial partners and encouraged cultural and commercial relations with the Axis until its blundering southern member stepped on his toes and forced him into the British camp.

Ever the military strategist at heart, he planned theoretical field campaigns against all his neighbors in the event of an attack on Greece, studied the weaknesses and flaws in every European war machine.

Italy’s war in Ethiopia and her Spanish blunders provided him invaluable information, and the construction of Italian highways through Albania to the Greek frontier revealed Mussolini’s plan of conquest.

When Der Tag came, Metaxas let the Italians filter through mountain passes almost to loannina; then sent his Evzones, born mountaineers, trained in the manner of German Alpine troops, against them.

Clinging “flowing” to the around peaks, positions that avoiding did not valleys, fall quickly, attacking constantly, his tough little Army soon cleared Greece of all but dead and captive Italians, carried the war into Albania. Deprived of its great strategist, Greece still has his plans worked out in minutest detail. Future success will depend on the ability of Commander in Chief Field Marshal Alexander Papagos to execute them without the lashing vitality of Banker Little at John the behind him.

Banker at the Helm

Metaxas’ death opened at least four political possibilities: dictatorship of a successor; dictatorship of George II; a constitutional monarchy; a republic. The selection of tall, dignified Governor of the National Bank of Greece Alexandros Koryzis as Premier did not settle the question. Greeks last week were inclined to view banker Koryzis as a leader in name only. King George, who had played at kingship and run away from responsibility, had become by elimination the strong man of Greece, and the banker was the King’s man.

Alexandros Koryzis is better-known for his impeccable sartorial appearance, his ringing speeches on “service,” and his national welfare work than for political attainments. He grew up in the National Bank of Greece and, except for two short vacations to become Minister of Finance in 1933 and Minister of Public Assistance in 1936, devoted his life to banking. He is not “a burly man of bone and gristle,” the kind demanded by King George for modern Greek leadership, and his only military experience was as an artillery captain in the Balkan War of 1912-13.

The Greek nation wept last week as it buried Little John in a simple marble tomb just below the Acropolis. War had changed political hatreds and passions into admiration, even affection. In his funeral oration, Premier Koryzis said: “You have opened the road to victory. We shall march along inflexible and determined. We shall reach the end.” Greece would have been more confident had Little John left at least one strong man to succeed him.