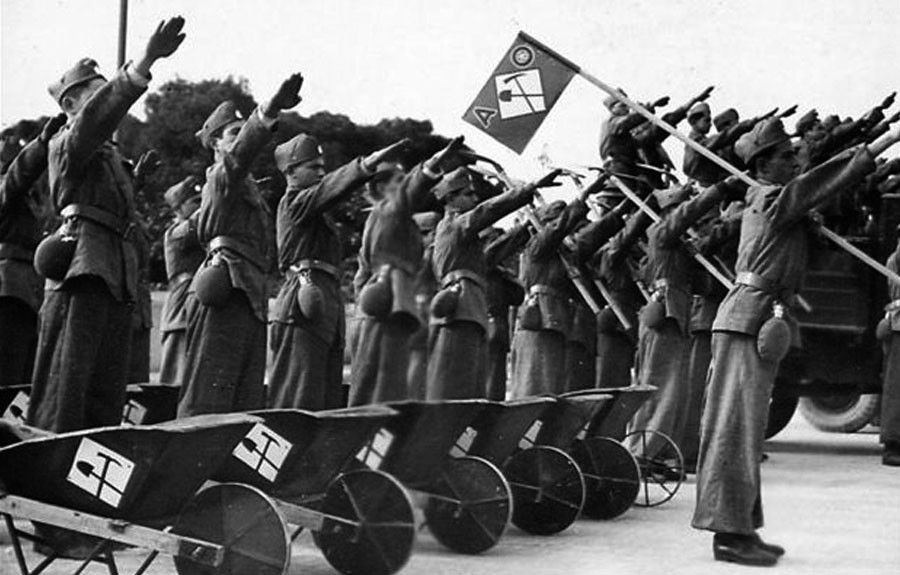 The Labour Battalions (Greek: Τάγματα Εργασίας, Tagmata Ergasias) was a short-lived paramilitary organization manned by unemployed Greeks during the quasi-fascist 4th of August regime in Greece (1936-1941). It was created as the initiative of Kostas Kotzias, the deputy minister of Athens in the regime led by Ioannis Metaxas. The first Labour Battalion was created in Athens in December 1937 under the leadership of John Vezanis, and it consisted of 400 people. Inspired in the Nazi Sturmabteilung (SA), the Labour Battalionists wore a gray uniform and as a symbol they had a pickaxe and a shovel in a rhombus.

It was formally established to exploit the unemployed in public works, but actually aimed to serve as a praetorian guard for the regime. It also served at the regime’s propagandistic aims, since they participated in most parades together with laborers and farmers, and usually waving flags, shovels, wheelbarrows, hoes, and piketes with slogans in favor of Metaxas. 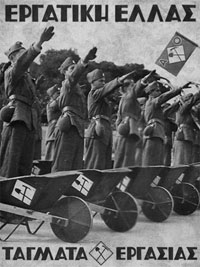 When Metaxas gave a speech to the Labour Battalions in December 1937, he urged them “to work with pickaxes and shovels […] without shame but with a sense of honor and pride. Courage for the work with the hands, which is the base of all cultures“.

Their action, however, was short-lived and practically did not exceed the boundaries of the Greek capital. Just like in Germany the Sturmabteilung was dissolved and its members incorporated into the SS after some years, in Greece the Labor Battalions were also dismantled on June 9, 1938 and its members were incorporated into the National Youth Organization EON.  The abolition was a personal decision of Ioannis Metaxas, who wanted to use its much larger paramilitary phalanx EON to concentrate all of the regime’s efforts to construct a popular base.