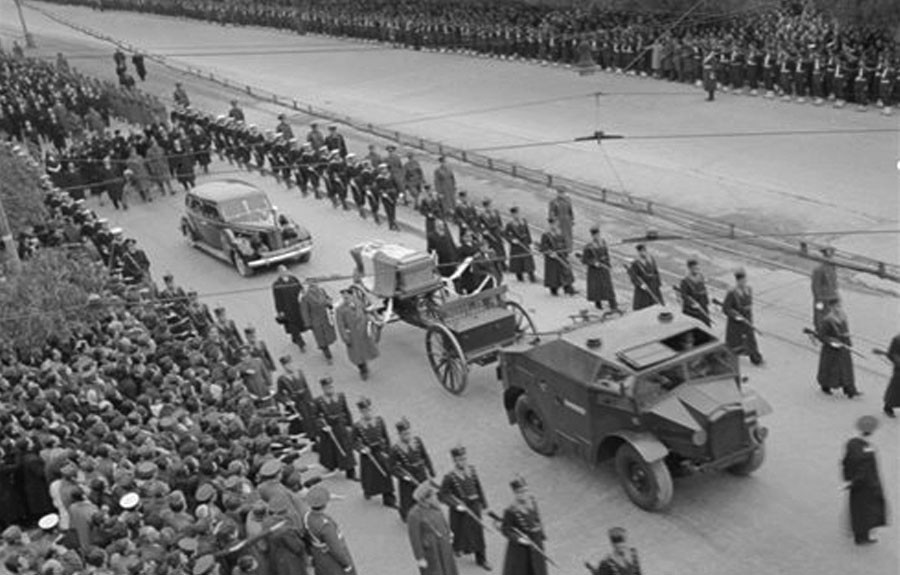 This is the original obituary published on The Examiner,  Wednesday 29 January 1941, about John Metaxas’ death.

London, Wednesday 29 January 1941. – General John Metaxas, the popular Premier-Dictator of Greece, died in Athens this morning after an operation for throat trouble. He was aged 70 years.

He was reported seriously ill yesterday after his operation on Saturday.

General Metaxas was the inspirer and chief leader of the heroic Greek resistance against Fascist treachery in Albania. With General Papagos, the Greek Commander-in-Chief, the Premier planned the resistance when Mussolini declared war on Greece, and the exploits of the Greek forces after falling back on the frontier at the outset have been a series of crushing defeats which have made history.

General Metaxas did not live to see his work carried out, but without doubt he has set his people on the road to victory.

Athens announces that the new Premier will be M. Alexander Koryzis, Governor of the Bank of Greece and Minister of Health in General Metaxas’ Government.

General John Metaxas made himself virtual Dictator of Greece by a “bloodless coup” in August, 1936. Feeling that the Parliamentary system had be come unworkable owing to the fact that the Communists held the balance of power in the Chamber, he used the threat of a general strike as his signal to strike. Parliament was dissolved overnight by decree, martial law was enforced and a number of Opposition leaders were quietly arrested. General Metaxas emerged as Prime Minister, Minister for Foreign Affairs, Minister for War, Navy and Air.

The early months of the dictatorship were mainly occupied with internal reform, encouragement of commerce, new public buildings and particularly education.

General Metaxas eventually took over the Ministry of Education in addition to his other duties in November 1938. He immediately put an end to the discords which had arisen in the church over the election of a new patriarch and set to work to form a National Youth Organisation for the promotion of culture and patriotism. Meanwhile General Metaxas was busy reorganising the national defences and reorganising the army. A formidable scheme of frontier fortifications had been begun in 1930 and was completed by December 1939. It was named after the Dictator, “the Metaxas Line.” Simultaneously General Metaxas sent message of congratulation to the troops on “the rebirth of the army” and its readiness “to defend the integrity and security of the nation.”

In foreign affairs General Metaxas based his policy on close friendship with Turkey, the stability of the Balkan Entente (Greece, Turkey, Romania and Yugoslavia, and improved relations with Italy. The Balkan Entente Conference in February, 1940, prolonged the pact between the four countries for another seven years from 1941 and proclaimed their determination to preserve their neutrality in the European war.

But General Metaxas lost no opportunity of insisting on his own account that Greece would keep what was hers and vigorously maintain her independence. In November, 1938, he declared that “Greece neither asks nor wants any thing of any power and will consider the demanding of territory from her by any other state as a hostile act.” This was the theme of repeated declarations by General Metaxas; and in December, 1938, he issued a harsh warning to persons spreading rumours that he was considering any surrender “to foreign demands affecting our national security.”

General Metaxas’ strong and able rule rapidly made him the hero of the Greek people. Every time he returned from a visit abroad, and on every August 4 -the anniversary of the founding of his dictatorship– he was received with tremendous demonstrations of the popular affection. General Metaxas was a man of unassuming manner. He had a strong dislike for uniform, which he never wore if he could help it. He insisted that, though a dictator, he was a civilian.