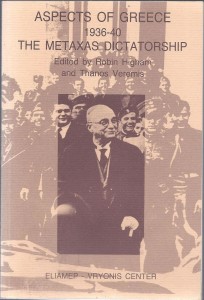 The dictatorship of Ioannis Metaxas has produced little substantive scholarship in Greek or other languages despite its momentous impact on developments in Greece both during its tenure and after its demise. European and American analyses covering interwar authoritarian regimes in a more comparative manner have tended to exclude the Greek dictatorship or to refer to it in generally superficial terms. Within Greece, because of complex political currents, balanced treatments of the Metaxas years have been ventured only recently. “The Metaxas Dictatorship: Aspects of Greece 1936-1940″, edited by Robin Higham and Thanos Veremis, is a positive step in the direction of meeting this scholarly demand. It provides essays covering a number of subjects critical for a better understanding of Greece’s pre- and early World War II years.

Coeditor Veremis opens the volume with an “Introduction” furnishing relevant historical background for the essays to follow. “The Power-Base of the Metaxas Dictatorship” by David H. Close investigates the important pillars that allowed Metaxas to rule without serious challenge after the proclamation of the dictatorship on 4 August 1936. The support of King George II, who agreed with Metaxas on fundamental issues, and the anti-Venizelist faction dominating the security forces furnished vital props for the dictator. Metaxas, wanting power entirely on his own terms, sought to break decisively with the old political world and displayed a preference for nonpolitical experts as government ministers. In establishing loyal security forces, the dictator, according to Close, benefited from the “expansion and development of the police forces in the previous 20 years, largely on the initiative of governments headed by Eleftherios Venizelos“. Although John Metaxas held the ministerial portfolios for the three armed forces, he shared power with the king and the respective chiefs of staff. In an important judgment, Close states that in the armed forces, as in the police, “the junior ranks came to consist largely of people trained under the dictatorship: a fact of great significance for postwar politics”. Overall, because the regime became increasingly unpopular, its basis was narrow and precarious in character.

In “Preparation for War, the Supply of Arms, and Foreign Aid,” military historian Robin Higham details Greece’s many essential weaknesses. He covers basic problem areas such as arms procurement, limited supplies, foreign assistance (or lack of it), poor transport capabilities, and military strategy. Although presented in an authoritative fashion, Higham’s essay suffers from the presence of factual errors and forced verbal flourishes.

“The Greek Peasantry: From Dictatorship to Occupation” by Alexander Kitroeff is one of the most valuable essays because of its analytical breadth. In a thematic fashion he discusses the political developments from the mid-1930s to the early 1940s that caused significant changes in the political views of the Greek peasantry. The hold over them of the Liberals, Populists, and Metaxists weakened; subsequently the peasantry became the mainstay of the communist-led resistance during the occupation period. “Peasant support for this resistance movement represented a radical political shift for a peasantry traditionally regarded as apathetic and increasingly conservative”.

John Koliopoulos, who earlier explored the subject at greater length in his excellent book “Greece and the British Connection, 1935-1941″ (Oxford: Clarendon Press, 1977), analyzes diplomatic issues in “Metaxas and Greek Foreign Relations, 1936-1941.” He emphasizes that Greece’s informal British connection “became the basic premise of the country’s foreign relations in the second half of the 1930s and the world war that followed”. Metaxas’s foreign policy was thus quite “traditional.” Ultimately, however, “the British underestimated the real as well as the potential value of Greece, while the Greeks overestimated Britain’s ability and willingness to come to their assistance”. The impact of such policy orientations did not register significantly in Greece’s campaign against the Italians but had momentous consequences for the planning and preparations prior to Germany’s invasion in April 1941.

In “The Greek Economy 1922-1941,” Mark Mazower and Thanos Veremis offer an informative analysis of what probably constitutes “the most dynamic, although turbulent, period in Greece’s economic history”. This sweeping coverage of the interwar period is necessary, but more emphasis on the Metaxas years would have been welcome here. Among Metaxas’s important economic initiatives were his comprehensive social security measures, attempts to promote greater self-sufficiency in wheat production, and public works projects. As with other states in southeastern and eastern Europe, Greece was drawn into Germany’s trade orbit because of Berlin’s willingness to buy agricultural goods and because payments were pegged to German marks in order to force these states to buy German goods.

Michael N. Pikramenos begins his examination of “The Independence of the Judiciary” by referring to the pattern of violating the judiciary’s autonomy that commenced in 1915 in the first stages of the Venizelist-Constantinist rift. A hiatus in the practice of court manipulation set in after the promulgation of the republic’s constitution in 1927 and lasted until the abortive Venizelist coup in March 1935. The conservatives reimplemented the unfortunate pattern, as they sought to purge the armed forces and civil service of Venizelists. Thus Metaxas inherited a policy that he could cause to exert even more manipulated and authoritarian control. Pikramenos concludes that the Metaxas regime “perpetuated the one-sided political orientation of the judiciary and inaugurated a most anomalous period, extending to the German occupation and the civil war”.

“The Ideology and Character of the Metaxas Regime” by Constantine Sarandis is the informative product of considerable research in primary sources, particularly in the dictator’s speeches and writings. The author concludes that the Fourth of August regime did not fall into the same category as the Italian fascist and German Nazi states but instead should be evaluated as a borderline state, in which “both resemblances and elements of imitation are present as important aspects of the regime, but they have not been pushed far enough”. Sarandis suggests that Metaxas’s rule should be considered a “paternalistic benevolent dictatorship of the New Right, which never reached the stage of becoming fascist”.

Panagiotis J. Vatikiotis, in “Metaxas – the Man,” provides some thoughtful observations but fails to treat this important subject in adequate breadth and depth. Moreover, his essay has no conclusion; it comes to a rather abrupt end with comments about Metaxas’ correspondence with his wife. If anything, the author impresses upon the reader the need for an in-depth biographical study of the Greek dictator.

Haris Vlavianos begins “The Metaxas Dictatorship: The Greek Communist Party under Siege” by underlining the importance of discussing the history of the Greek Communist Party (KKE) in domestic terms. He proceeds to argue that it was the KKE’s “inability or reluctance to come to terms with Greek realities of the time, its doctrinaire priorities and organizational sectarianism, that account for its spectacular failure to resist the forces that gradually led to the establishment of the Metaxas dictatorship”. In the aftermath of 4 August, the KKE displayed paralysis and then disintegrated, falling victim to the repressive policies of the security forces. Vlavianos discusses at length the controversy surrounding letters written by Nikos Zachariadis, the KKE’s leader, after the Italian invasion. The war’s arrival in Greece provided the KKE with the opportunity to resurrect itself, and the concluding section of this valuable essay offers explanations for the dominating role assumed by the KKE during the occupation period.

“The Metaxas Years in Perspective” by coeditor Robin Higham provides a disappointing close to the volume and should be read with caution because of a number of factual errors and misleading generalizations. A more appropriate approach might have tried to place the Metaxas era in the overall stream of Greek political developments during this century. It is critical, for example, to note that major leaders of the Greek military dictatorship from 1967 to 1974 were military academy cadets during the Metaxas era and were obviously quite influenced by the dictator. Indeed, one hopes that just as scholars have combined their efforts to produce this helpful volume on Metaxas, equivalent undertakings will produce studies on the more recent dictatorship, about which so little of an academic nature has been written.

The Metaxas Dictatorship: Aspects of Greece, 1936-1940. Athens: Hellenic Foundation for Defense and Foreign Policy and Spyros Basil Vryonis Center for the Study of Hellenism. 1993.