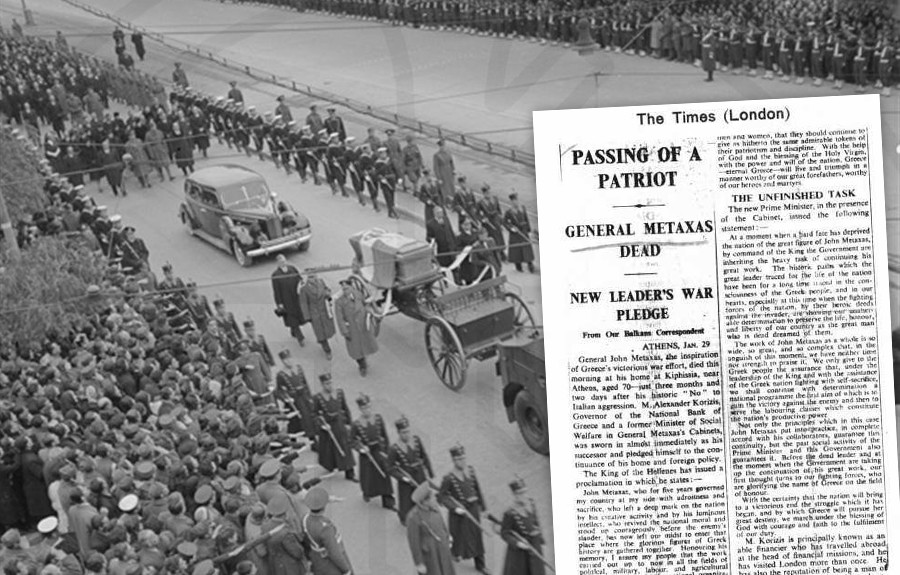 The pledges of Koryzis and King George II upon Metaxas’ death

After Metaxas’ death in late January 1941, the former Alexandros Koryzis, Governor of the National Bank of Greece and a former Minister of Social Welfare in the 4th of August’s cabinet, was sworn as Metaxas’ successor.

He pledged himself to the continuance of the Archigos’ work with these words:

At a moment when a hard fate has deprived the nation of the great figure of John Metaxas, by command of the King the Government is inheriting the heavy task of continuing his great work. The historic paths which the great leader traced for the life of the nation have been for a long time traced in the consciousness of the Greek people, and in our hearts, especially at this time when the fighting forces of the nation, by their heroic deeds against the invader, are showing our unalterable determination to preserve the life, honour and liberty of our country as the great man who is dead dreamed of them.

The work of John Metaxas as a whole is so wide, so great, and so complex that, in the anguish of this moment, we have neither time nor strength to praise it. We only give to the Greek people the assurance that, under the leadership of the King and with the assistance of the Greek nation fighting with self-sacrifice, we shall continue with determination a national programme the first aim of which is to gain the victory against the enemy and then to serve the labouring classes which constitute the nation’s productive power.

Not only the principles which in this case John Metaxas put into practice in complete accord with his collaborators, guarantee this continuity, but the past social activity of the Prime Minister and his Government also guarantees it. Before the dead leader and at the moment when the Government are taking up the continuation of his great work, our first thought turns to our fighting forces, who are glorifying the name of Greece on the field of honour.

With the certainty that the nation will bring to a victorious end the struggle which it has begun, and by which Greece will pursue her great destiny, we march under the blessing of God with courage and faith to the fulfillment of our duty.

On the same date, King George II also issued a proclamation about the 4th of August regime’s continuity in which he stated in his own words:

John Metaxas, who for five years governed my country at my side with adroitness and sacrifice, who left a deep mark on the nation by his creative activity and by his luminous intellect, who revived the national moral and stood up courageously before the enemy’s slander, has now left our midst to enter that place where the glorious figures of Greek history are gathered together.

Honouring his memory, I assure my people that the work carried out up to now in all the fields of political, military, labour, and agricultural reform, as well as in the national organization of youth, will continue ever in the same spirit. The fact that the President, as well as the members of the new Government, to which I now as hitherto have given my approval, have been for a long time collaborators with the dead man is a clear guarantee of this.

Closely united with my people who are gathered round my throne, and inspired by the high example of the recent glorious pages in our national history, I am certain that, with loyalty and self-sacrifice, my Ministers will, with devotion and self-sacrifice, lead to the end the gigantic struggle which the heroic Greek Army is continuing on the field of honour, and which, you may be sure, will bring the struggle to a triumphant end.

I ask, from all Greeks, men and women, that they should continue to give as hitherto the same admirable tokens of their patriotism and discipline. With the help of God and the blessing of the Holy Virgin, with the power and will of the nation, Greece -eternal Greece- will live and triumph in a manner worthy of our great forefathers, worthy of our heroes and martyrs. 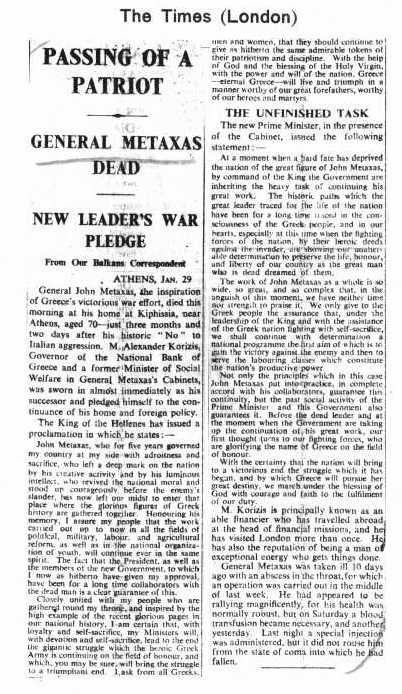