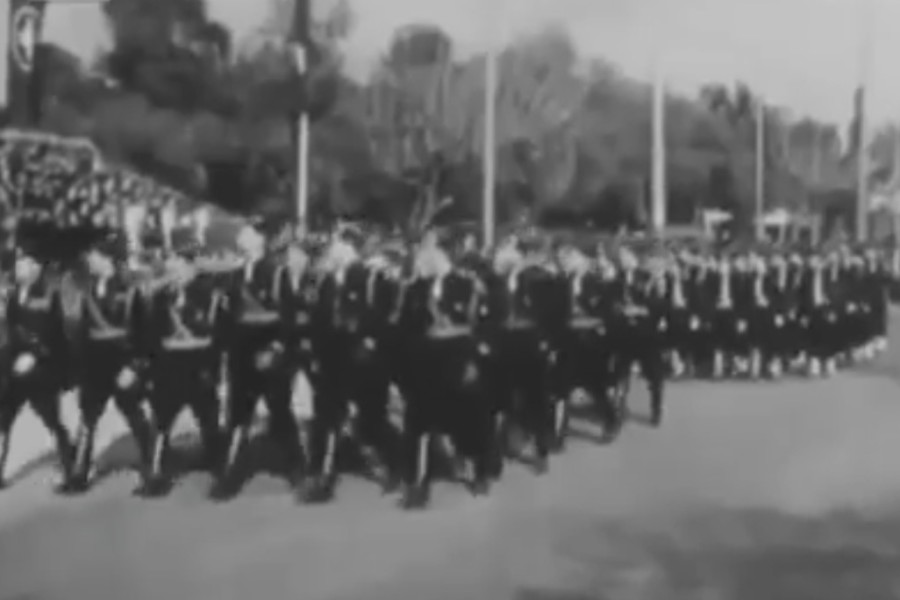 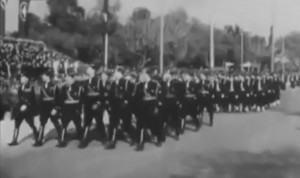 On certain occasions, the propaganda used by the 4th of August regime aped the methods of Mussolini and Hitler. Metaxas gave himself symbolic titles, such as ‘First Worker’ (Protos Ergatis) and ‘First Peasant’ (Protos Agrotis), founded the national youth organisation EON (Ethniki Organosis Neolaias) which resembled the Hitler Youth, and introduced the ‘Roman salute’. However, observers inside and outside Greece agreed that Metaxas failed to generate genuinely popular support.

Moreover, these were not symbols of unity rooted in an original mass movement, and Metaxas’s road to power was very different from both Hitler’s and Mussolini’s. The fact that the regime was not based on a mass movement indicates that it would be wrong to call the dictatorship ‘fascist’. Moreover, the regime did not have any plans for territorial expansion: these had been buried in the wake of Greece’s disastrous campaign in Asia Minor in 1920-22.

However, all such observations on the Metaxas dictatorship pertain to a regime in its early infancy. The fact that Metaxas obviously intended the regime to be a permanent one makes it necessary also to evaluate the institutions and symbols which Metaxas created in regard to their potential significance and meaning in a long-term context. Seen from this point of view, Metaxas was clearly attempting to transform the Greek mind, and create generation of new and regenerated Greeks. These efforts were in line with the ones undertaken by Hitler, Mussolini and Stalin to create a ‘new man’. The ideological content of Metaxas’s reforms, however, had much in common with Fascism and Nazism, and can be seen as an attempt to reorient Greece in a direction which would also make it conform with the planned Axis ‘New Order’ in Europe.

The fight against communism was the area in which the shared ideological interests of the two regimes were most significant and successful for both parties. The oppression of political opponents, and in particular of the Communists, during the Metaxas regime was, in terms of determination and efficiency, without precedent in Greek history. In November 1936, on the initiative of the Gestapo, and as the result of an inquiry from the German legation in Athens, Metaxas declared that he approved the Greek Security Police and the Gestapo joining for to exchange information as a defence against ‘Bolshevik agitation’. According to a German assessment, it was because of Metaxas that only a year after the of his regime, communism lost its most important stronghold in the Near East.

At the end of 1937, the British legation acquired an item of correspondence dated May the same year between Heinrich Himmler, head of the SS, and Konstantinos Maniadakis, the Secretary of Security. This stated that Maniadakis accepted an invitation on behalf of the Greek police to participate in a congress about methods to fight communism. In this way German assistance also played a part in Metaxas’ fight against internal enemies.

It is notable that the British Foreign Office learned from sources in Germany that ten per cent of the value of the German arms trade to Greece went to Metaxas. The money was used for the establishment of Metaxas’s party machinery and propaganda for the regime. The British legation in Athens did not doubt the validity of the information, and in their eyes the crucial question was whether Metaxas would finally manage to claim supremacy and thrust the King into the background.

During the initial phase of the dictatorship, Metaxas made it clear to the public that he did not hold anti-Semitic views. According to Kordt, this reverberated in the censored Greek press, which stressed that the Jews in Greece had the same status as any other citizen, and that anyone in Greece who entertained anti-Semitic feelings was a bad Greek. This stance was also noticed abroad. The Jewish Chronicle in London printed a short article in September 1937 which praised Metaxas for prohibiting the publishing of anti-Semitic writings.

However, this public image contradicts the impression Goebbels gained from his talks with Metaxas in September 1936, which prompted him to characterise Metaxas as ‘strongly anti-Semitic’. This conversation, of course, was private, and Metazas might have attempted to please Goebbels by expressing such views. Nevertheless, it indicates that Metaxas found it opportune to convey the impression to Berlin that he held anti-Semitic views.

The regime also madesome groundwork in institutionalising overt and state-sponsored anti-Semitism, as well as untermenschen ideology. Application for membership of the EON, established with an eye to creating a new stock of regenerated Greeks, required the individual to be a Greek Christian. No Jews, Muslims or other minorities were permitted. At its peak, the EON had more than one million members. The frequent, and massive, book-burnings organised by the state included works by personalities whom Nazi anti-Semites systematically identified as exponents of international Judaism, namely Stefan Zweig and Sigmund Freud.

Whether or not this state-sponsored anti-Semitism arose from heart-felt convictions, we should note that it does provide some evidence that Metaxas’s Greece was a seriously race-conscious state that would form part of a future Axis-dominated New European Order. Moreover, in general the regime placed much emphasis on creating a national identity based on cultural and ethnic homogeneity. To this end, Turkish-speaking Muslims, Slavophones and Albanian-speaking minorities were forced to compromise their beliefs, and instruction of Greek became mandatory in minority schools.

The regime also damped down on the subculture of the refugees from Asia Minor, in regard to certain manifestations of their specific identity. This, in particular, found an expression in the rembetika tradition: certain songs were prohibited, while the police closed down clubs and even imprisoned performers on the grounds that they were politically or morally subversive.

The regime wanted to create a modern, and culturally heterogeneous, Greece in the image of classical Hellas and Byzantium, and introduced a cultural and national policy of integration. Metaxas ascribed paramount symbolic significance to a militaristic and oligarchic Sparta, and depicted Sparta as the first of three Greek civilisations. The two others were Byzantium, representing the Christian Orthodox ideal, and Metaxas’s own regime, portrayed as ‘the Third Greek Civilisation’.

Metaxas believed that after almost 400 years of Turkish domination, Greek civilisation was totally obliterated, and he saw the ideal of classical Greece as a means to elevate twentieth-century Greece from its present level, as ‘bastard culture’ of idle individuals, into a ‘pure race’ of disciplined and uncorrupted men and women working fot the common cause of creating a ‘new Greece’. It is notable that Metaxas did not see classical Greece merely as an ideal to be passively admired, but rather as a method for political action to modernise society.

– Excerpt from a book by Robert Mallett, ‎Gert Sorensen