Around the time of the 4th anniversary of the establishment of the 4th of August State, a train-based exhibition was launched to show the regime’s achievements to the citizens of the countryside. Approppiately, it was organized by the Directorate for Popular Enlightenment of the Sub-ministry of Press and Tourism, headed by Theologos Nikoloudis.

This mobile railway exhibition of the 4th August, consisted of three large train wagons which were transformed into room exhibitions. It was transported by train throughout the country’s provinces.

The Greek newspaper Kathimerini wrote on its edition of August 4th, 1940, about the mobile exhibit:

“A keen wish of productive work and four-year-old culture is provided in these rooms with compositions, with rare photographs, with symbolic images, texts and autographs. What they can not see from what happened to the inhabitants of the provinces and the villages and that they were informed directly will be presented to them by the first-ever mobile railroad exhibition of the Ministry of Press and Tourism.

This mobile exhibition will remain until Wednesday afternoon at the Larissa Railway station with which it will cling to the first train and will be transported to Alexandroupolis, to later begin its descent to Thessaloniki and its subsequent transfer to Florina. The inhabitants of the countryside and the provincial cities prepare for the enthusiastic reception. The arrival at each station and the time of her stay will be officially announced so that all residents can descend to the station and visit it.”

Below there are some pictures from the train: 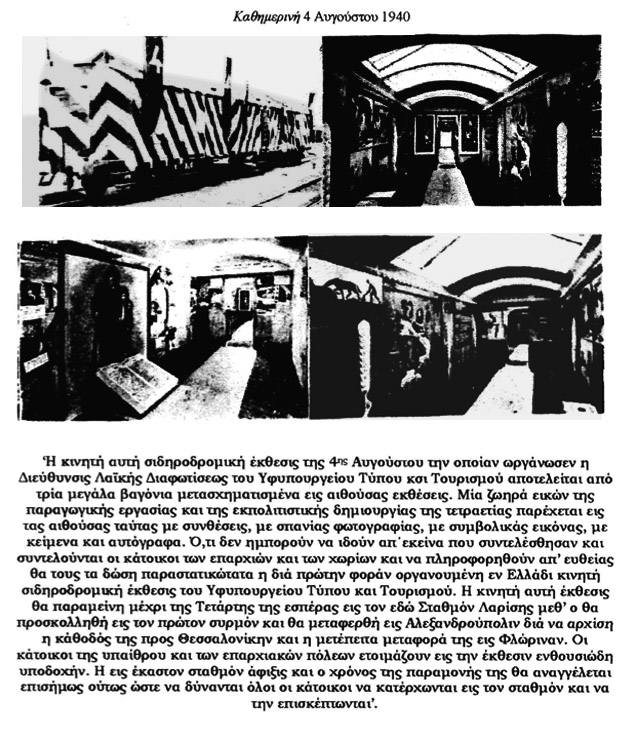