Sitsa Karaïskaki was one of the main propagandists in the 4th of August State. Born in 1902, in 1926 she went to Germany, where she studied Philosophy at the University of Munich, eventually gaining her doctorate. She was in Germany when Adolf Hitler was struggling to achieve power, and there she embraced National Socialist ideas.

When the Nazis finally came to power on January 30, 1933, she was appointed executive at the Ministry of Propaganda. Joseph Goebbels appreciated the education and qualifications of a “young Greek woman,” as she called her, and Alfred Rosenberg frequently mentioned the training of a “Greek collaborator” in the Enlightenment department. According to reports, Sitsa Karaiskaki was also chosen by the Abwehr chief (and a descendant of the Greek Kanaris family) Wilhelm Von Canaris to become an associate of the German secret intelligence service in the field of propaganda.

In 1933, together with the lawyer Evangelos Kyriakis and the author Kyriakos Karamanos, she founded the publishing house “Nea Genea”, which had the pelekys or Minoan double axe symbol as logo, a symbol which was later adopted by the National Youth Organisation EON of the 4th of August State. An important book published by the editorial was the political diary of Joseph Goebbels titled “From the Kaiserhof to the Reich Chancellery”. Other published books were “Jews and Communism” by Hermann Fest in 1934, “Mental and spiritual poison – The essence and spirit of Bolshevism” or “The war against religion and the Church”. Also in 1934, Karaïskaki, who wrote both in Greek and German, wrote and published her book “Das dritte Reich durch meine Brille” (“The Third Reich through my glasses”), referring to the events of her contemporary time and “the achievements of the National Socialist government”.

During the Berlin Olympic Games, she was involved in hosting the Greek olympic team and was responsible for organizing the Greek participation in terms of press and propaganda.

After Ioannis Metaxas established his regime on August 4th, 1936, he appointed Karaïskaki to play a leading role in the creation of the Greek fascist youth organization EON and the “H Neolaia” magazine, which was the most powerful ideological instrument of the EON. Karaïskaki’s influence in the EON was so strong that the symbol of Karaïskaki’s publishing house, the double axe, was chosen as the emblem of the EON.

She became a regular contributor of the “H Neolaia” magazine, where she signed as “Doctor at the Munich University” under her name. There she became a key columnist answering letters at the “Selida ton Koritsion” (Greek for “The Girls’ Page”), where she gave advice to youths and women and incentived them to keep National traditions but also to prepare for a healthy family, while generally advocating the positions and the ideology of the Metaxas regime. She also worked with another 4th of August propaganda outlet, the “Nea Politiki” magazine. A fervent admirer of Metaxas, she once wrote: “We love this Man, the Soldier, the Unique, the Chief, the Father, the Inspirational, the Guide, the Human, John Metaxas”. 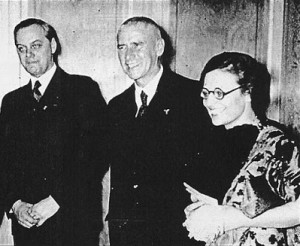 In autumn 1940, with the onset of the Greek-Italian War and the conflict between Metaxas and Mussolini, she wrote articles against the Italians, but kept her affinities to Germany and with Third Reich officials. Finally, when Germany occupied Greece in April 1941, she was appointed Press and Enlightenment officer in the German embassy in Athens, a post she maintained throughout the German occupation. After the Liberation of Greece by the Allies in October 1944, she left the country and worked for the exiled Greek collaborationist government of Hektor Tsironikos (called “Greek National Commitee”) in Vienna.

After the fall of the Nazi regime and the occupation of Germany by the Allies, she went to reside in the Soviet-occupied Eastern Germany. There she married the German industrialist Bachman. Meanwhile, in Greece, she was persecuted for her National Socialist views. On August 18, 1945, she was sentenced in absentia twice to death by the Special Courts of Collaborators, according to the Constitutional Act 1/1944, “on sanctioning the cooperation with the enemy”, and the amendment of the Constitutional Act 6/1945, on grounds of having being active part of enemy propaganda “despite the sure final victory of the Allies”, but she was later amnestied.

In 1963, after the death of her husband, the East German authorities allowed her to get back to Greece. After her return she devoted herself to literature and presented some books which earned favorable reviews and awards, but she never renounced her National Socialist beliefs. Towards the end of her life she moved to her parents’ house in Mytilini and later lived with her ​​sisters in Amfithea, Palaio Faliro (near Athens), where she died on April 30, 1987.

– Biography by Markos Vallianatos, taken from his book “The untold history of Greek collaboration with Nazi Germany (1941-1944)”