Symbols of the Metaxas regime (4th of August State)

The regime established by Ioannis Metaxas on August 4, 1936 was branded as the ‘New State’, so it was only normal that the new state would have a new symbol. The same had occured earlier with the Fascist and Nazi ascent to power in Italy in 1922 and Germany in 1933 respectively.

The Metaxas government invented a new symbol to represent the newborn 4th of August regime. While Hitler had created the Nazi flag with a swastika against a white circle in a red background and Mussolini had created the Italian fascist flag with a fasces over the Italian flag, Metaxas adopted the Greek coat of arms in a rounded shape and complemented it with a torch and the number 4 – the latter representing the day the regime was established of course. On many occasions, as pictured below, it also contained the word “Avgostou” (Greek for “of August”) at the lesser part of the shield (different fonts were used).

Here is in its full-colour and one-colour variants (originals, no retouch made): 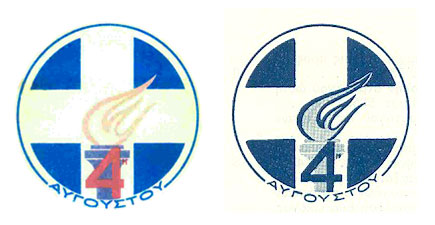 Here are some print applications of the emblem in very different contexts such as propaganda posters and official stamps issues in 1937: 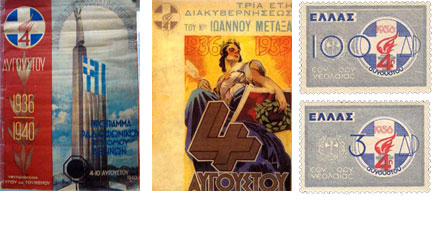 And here a real-life application (picture taken from the ‘Metaxas Jugend’ book):

It’s worth mentioning that two of the main elements of the 4th of August’s symbol, the number 4 and the torch, were also used in an independent way – and quite profusely.

In fact, the number 4 quickly became synonymous with the 4th of August regime, and the torch, whether in its own or being grasped by a divine figure – as often occurred -, was used in many different applications beyond the logo itself, as in propaganda illustrations.

This is no minor detail, as the torch was the quintessence of the 4th of August state. It represented the ideology of the New State – to illuminate Greece in its path towards National Renaissance (“Anagennisis”), just like Prometheus in the Greek myth aims to illuminate mankind. National renaissance was indeed one of the main tenets of the Greek fascist regime in its mission to lay the foundations for a ‘Third Hellenic Civilization‘ to emerge. From this perspective, the torch is a very appropiate symbol because Metaxas believed that the Greeks, through the Third Hellenic civilisation, would enlighten the world as they had done in antiquity through classical Greece and in the Middle Ages through the Greek Byzantine empire.

Here are a few examples of the torch being profusely used: 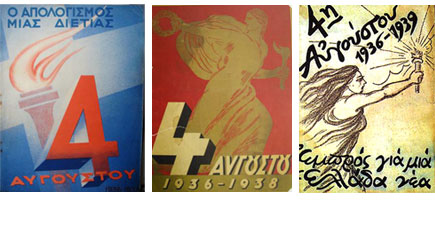 While the Greek shield with the torch and the number 4 was used profusely, it’s also true that its traditional version, the white Greek cross against a blue background without the torch and the number four, was also used throughtout the dictatorship. This ideologically devoid symbol was used on occasions when it was a national event with no specific relationship whatsoever with the regime.

A derivation of the Greek shield was the encircled Greek cross, another usual symbol of the Metaxas regime. This design depicted a Greek-style (all arms equal) white cross encircled by a white circle of the same width as the arms of the cross. This symbol was often used in white heading large vertical blue banners, as pictured below: 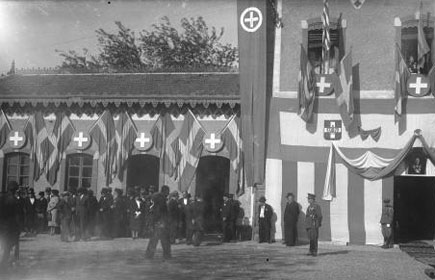 If you are interested in the symbology of the Metaxas regime, I invite you to read ‘Metaxas Re-branded – Posters from the Fourth of August regime’, a book where this topic is graphically discussed and 50 posters from the Metaxas years are provided.

But not so fast. The Greek shield with the torch and the number ‘4’ and its derivatives was not the only symbol crafted by the 4th of August state.

An almost equally important emblem was the pelekys, the double-headed axis. This symbol was an archaic symbol of the Greek thundergod Zeus, as the ancient Greeks believed that he brought storm by wielding it. Metaxas believed that it was the oldest Hellenic symbol, and so he chose it as the emblem of the National Youth Organization (Εθνική Οργάνωση Νεολαίας, EON), the Greek equivalent to the Hitlerjugend.

Here is a picture of several members of the Greek fascist phalanx waving flags with the double headed axe. Notice the flagpole ends, which also feature an axe. 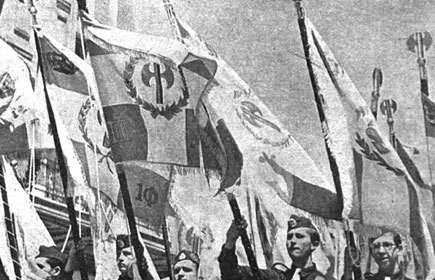 Here is one real-life picture showing two shapes of the double-edge axe:

The double headed axe was distantly similar to the fasces, the symbol of Italian fascism. Also, the EON uniform was not too different from that of its Italian equivalent, the Balille. Here is a comparision: the Italian fascist youth (Balilla) is on the left, while the Greek fascist youth (EON) is on right: 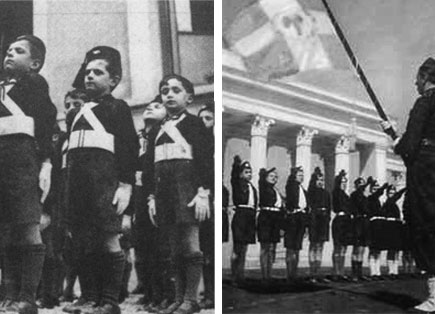 Because it became the regime’s largest creation and because it represented the regime’s future vision of Greece, the EON’s symbol emerged as an equal symbol of the 4th of August state as a whole, not only of its youth organization.

As a curiosity, the regime’s official propaganda publishing house, Ekdoseis Ethnikis Etairias, mixed the number four and the axe to create its own corporate logo: 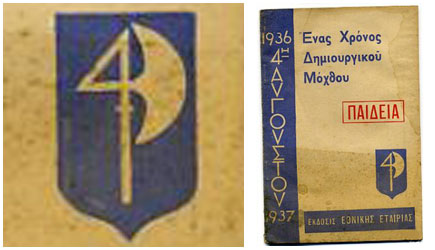 By Andreas Markessinis. Andreas Markessinis is a specialist in Ioannis Metaxas and his regime, the 4th of August state, about which he has written several books. He has just published ‘Metaxas Re-branded’, a new book containing 50 posters from the Fourth of August regime. You can have a look at his books at Pelekys.com.