Tourism under the Metaxas regime 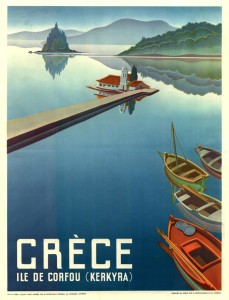 The National Tourist Organization also started a publicity campaign about the beauty of nature in Greece whilst in 1933 a new law (5181) regulated the operation of hotels and introduced the idea of listing them by rank of comfort. In 1935, development of the hotel business was developed enough so that the Hellenic Association of Hotel Owners was founded. In 1936, upon the rise to power of the semi-fascist regime of Ioannis Metaxas, the post of Undersecretary of Press and Tourism was created under the leadership of Theologos Nikoloudis at the Ministry of Foreign Affairs and a monthly bulletin began to be published by it.

Tourism had acquired particular importance for the new regime. It was in fact, conceived as part of the propaganda machine. The Ministry’s scope, according to emergency law 45/29-31.8.1936, art.1, extended to informing public opinion, control of the daily and weekly press, all types of conferences and congresses, exhibitions, theatre, cinema, gramophone records, advertisements, publications, and other events, “so that they conform to national traditions and ideals”.

Article 2 stipulated that the Ministry was responsible for the organization of tourism in Greece, for diffusing propaganda abroad, for the control of arrivals, residence and in general movement of foreigners in Greece and supervision of all relevant public and private organizations, enterprises and professions. The Ministry also requisitioned property (hostels, bungalows, furniture etc.) belonging to EOT and suspended its board of directors. Of the ten departments and directorates organized within the Ministry, four dealt with tourism affairs and it was clear that particular attention was given to the only organized form until then, health tourism, which was supervised by the ‘Directorate of Spas and Expositions’.

The ‘Committee for Foreigners and Expositions’ of the Ministry of National Economy depended now on the new Ministry. The rest of the services included the Directorate of Tourist development which was responsible for publications and information and which supervised external services; the Directorate of Tourist Organization which among others, supervised hotels, means of transport, local committees, constructed and maintained hostels, bungalows and other buildings, enhanced archaeological sites, ports, monuments etc, protected heritage, and kept a follow up on the activities of various private associations, organized and supervised the operation of a School for Tourism and another for the preparation of guides. 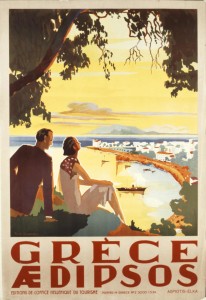 There was also a Department of Tourism Statistics and Overseas Communities. A year later, the Higher School of Tourism was founded. Finally, in 1939 the Hellenic Association of Hotel Owners was renamed Organization for Hotel Credit extending its scope to issuing loans for new hotel. Its business was interrupted, however, by the War and Civil War and it never exercised its functions.

These measures were of course isolated and far from constituting any systematic policy, added to the confusion about the status of tourism in Greece. At best, the new sector was considered a substitute for the opportunities created in the past by the Army, in other words, it was simply a means of keeping people in partial employment. On the other hand, within the corporatist perspective which was one of the distinguishing marks of the Metaxas regime (1936-1940), tourism became valuable because it was seen as a means of political and ideological mobilization of all those who were left outside the political discourse, and especially women. Through tourism a return to tradition could be effected and women could become the agents of this revival (conceptualized as revival of traditional crafts and home industry – knitting, embroidery, weaving, cooking, baking etc.) and the keepers of the old idea of hearth and family linked with agriculture. This was very different to what Venizelos had envisaged fifteen years earlier.

Tourist development was not pursued for its intrinsic value as an economically meaningful activity but rather as a pretext for integrating the unemployed into the corporatist system. As a result little was done to attract more visitors or to improve facilities and this was reflected, among other, on the unchanged composition of tourist groups, which were in 1938 still dominated by Greek expatriates, whilst the total number of visitors between 1930 and 1940 did not exceed 100000 annually, of which almost 1/3 were group tourists staying in the capital for only one day to visit the antiquities in Athens. Short stays was a function of the low level of facilities which was circumvented by choosing organized cruises arranged by foreign agents who operated through their correspondents in Athens. Among tourism officials, the dominant view remained that the new sector could not be a serious economic resource for Greece.