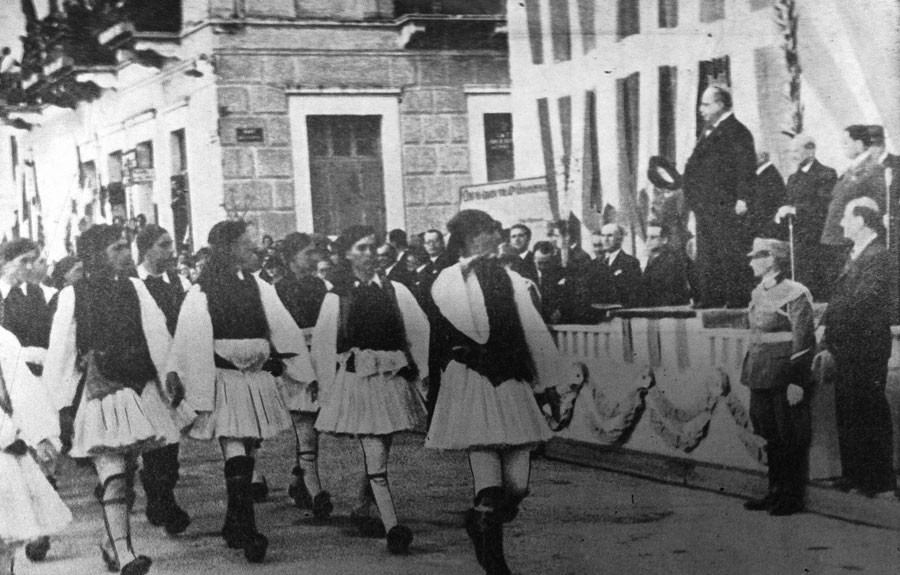 Why did Metaxas not have a mass party?

One of the most remarked features of the Metaxas regime was that the 4th of August state, unlike Nazi Germany or Italian Fascism, Greek fascism did not have a mass party.

Indeed, while many interwar authoritarian or totalitarian regimes were supported by strong parties, in fascist Greece there was no such movement. Similarly to its European counterparts, the Greek dictatorial power structure involved an alliance of the traditional industrial elites, banking capital and the military, but unlike other regimes, it lacked the powerful base of a fascist party.

Why was it so? There are various reasons.

In the first place, unlike Hitler and Mussolini, Metaxas did not need a mass part to reach power. He imposed his dictatorship by his own means and under the acquiescence of the King. This was essentially different from the aforementioned European collegues, who needed a mass party to rise to power. Unlike them, Metaxas never needed one as he reached power without one.

Once in power and with his regime already established, parties were again unnecessary because parliamentarism had been abolished. Additionally, Metaxas did not need any social base, even non-political, to consolidate his power, because his skillful government, together with the Greek people’s contempt for the way old parliamentary politics worked, proved to be enough for the consolidation of his authority in Greece. Not only there was no need to for a new political party, but also Metaxas accurately believed that Greeks did not want another one, for the simple reason that they were fed up of them.

What’s more, not only he knew that Greeks did not want parties, but he was also ideologically hostile towards any party concept, to the extent of persecuting or forbidding pre-existing domestic fascist organizations or parties, even those which would probably support him. Metaxas did not believe in parliamentarism nor in political parties – of any kind, even of his ideological correligionists.

Truth be told, his contempt for party politics came from old. In earlier years, one of Metaxas’ greatest concerns was the rivalry between the two large parties in Greece, the Liberals (Republicans) and the People’s Party (Monarchists). Metaxas believed that these parties exacerbated the divisions in Greek society and split the country into two opposing camps hostile to each other. He believed that “both parties favour their own petty party interests, promising positions and favours to prospective voters. Once in power they manipulate state mechanisms according to their party interests instead of promoting the national interest. As a result of this rivalry, the major threat is Communism and Anarchy”.

One could argue that despite his antipathy towards party politics, he created his own party, the ‘Eleftherofrones’ (the ‘Freethinkers’ party), but Metaxas explained that the party had precisely been founded as an alternative choice for the two significant parties, the Liberals and the Populists, and provide a way out for a political blockade. According to the party manifesto, The Freethinkers’ aimed to ‘replace the methods of the condemned past’.

His hostility towards party politics wasn’t because of his military background. To the contrary, Metaxas, unlike other military officers who had exposed anti-parlamentarian ideas, had a long political career and had participated in Greek politics for many years. He had political experience, as he had had his own party (the Freethinkers) and even more, he had been successful with it. In the 1926 elections, Metaxas’ party gained 52 seats in the parliament against 108 Liberals, 63 of the People’s Party, 18 of the Democratic Union, 3 of the Farmers’ Parly and 9 Communists. That was a major electoral success for Metaxas as a leader of a political party, and shows that he was able to attract a certain percentage of the floating voters at that period, and came close to displacing the People’s Party from its central position in the anti-Venizelist camp.

Despite his successes in politics, his experiences in the Parliament made him completely hostile to party politics. He began to see parties as a liability rather than an asset, noticed that it was party politics what had brought demise for Greece and dismissed it as political abherrations which had created a corrupt clientelistic system. Around 1934 Metaxas started to declare openly his resentment towards parliamentary politics and to talk about the bankruptcy of the Parliament as an institution. Metaxas disliked the polarised division of the party-politics in Greece, and thought that the nation should overcome the mentality of petty-party behaviour, which had condemned the country to social divisions. His solution consisted of “cooperation between the different political factions and compromise between the parties”.

This new system would replace Parliamentarism, which according to Metaxas had been imposed on Greece unnaturally. Metaxas believed that the British Parliamentary system was perhaps beneficial for Great Britain as a British invention suited to the British reality, but not for the rest of the Europe. He argued that Parliamentarism had been forced down Greece’s throat just after the country achieved independence in the early 19th century, and therefore Greece had not had the chance nor the time to develop her own political system suited for her needs. “For us the problem is not how will we remain a parliamentary system but how we will get ridden from it” he declared in 1934.

According to Metaxas, not only the liberal- parliamentary model was ill-matched to the Greek tradition and history, but was also damaging the nation, because it was counter-productive for a country’s progress. Metaxas believed that, in consequence, the country was in political chaos and among the Greek voters there was a deep political cleavage. He blamed the past political system, a “rotten system” and “a dead organism with the only intention of manipulating the Greek people and collecting their votes”. Such system was not concerned with the voter’s need, and instead was using every unethical means to remain in power. Moral and economic degradation was also natural consequences of that ‘rotten system’.

Even if he did achieve remarkable electoral success on occasions, he despised party politics and electoral contests as a debased form of populism. For most of his life, he was not a popular person, but he considered himself a better leader than most, and learnt early that modern democracy would not elect the best or more capable, but the most popular. This fits well with a statement made by Metaxas in which he said he resembled Salazar more than Hitler and Mussolini because the Portuguese leader rose through the merits of his ‘scientific qualities’ to improve his country by reforms from above and not raised to power by the support of a mass movement, which he considered ‘vulgar’.

Finally, in his totalitarian world-view, Metaxas believed that there should be no allegiances other than to King, Nation, Leader – and so there was no place for party loyalties. Metaxas accurately wrote in his Tetradio ton Skepseon: “Sure, Greece had no special ruling party. But the whole people were the party except the diehard communists and the reactionary adherents of the old parties.” “The whole Greek nation is our party”, he once said. Metaxas considered the whole people as his social base and his following, so while in power he never did not consider the creation of a party.

Metaxas’ aversion towards parties is even more obvious when one assesses that the 4th of August state bore basically the imprint of one single man. It was precisely because the whole regime was based on the genius of Ioannis Metaxas that there was no need to create a party. On the contrary, he deliberately positioned himself as being above politics. And his grasp on the Greek state was so tight that only his death could dethrone him – when one thinks that he never had any social base to support him speaks a lot on his undisputable weight as a leader.

Was the EON an attempt of Metaxas to create a mass party?

Many authors claim that due to the lack of a State-party and an organized social base which could support the 4th of August regime, the youth organisation EON was seen by Metaxas as the only party of his regime. But I believe this interpretation to be historically inaccurate and debatable.

For starters, as we have seen above, Metaxas did not need a social base to stay in power – much less from youngsters. Only death dethroned him. Secondly, EON was build for different reasons. One one hand, Metaxas’ intention was to have a Praetorian guard made by himself from the ground up to prevent insurrections from the military or the political establishment. And on the other hand, and more importantly, he believed that the Third Hellenic Civilization he longed for required a new generation of Greek men and women moulded to this ideal.

In fact, the Greece of the future should be governed by the elite of the EON youth organization. Thus, there was no need for political cadres or dolphins sitting in political parties. The aim was the creation of a “totalitarian state class” above classes and parties which would secure the future of the Metaxian state and would correspond better to the needs of the times ahead.