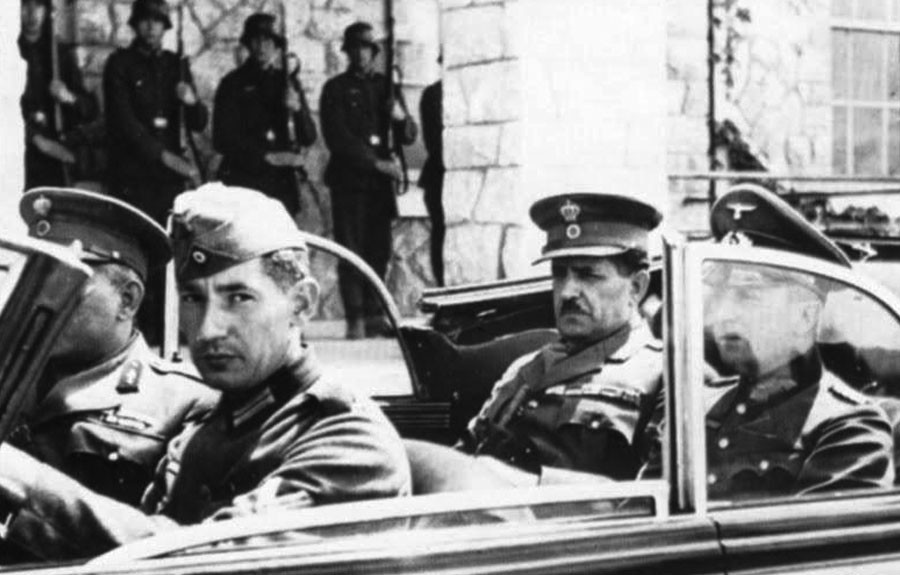 Greece entered the Second World War after an attack by the Italian Navy on August 15, 1940, when an unidentified submarine torpedoed the Greek Navy Frigate Hellē in the harbor of the Cycladean island of Tēnos during the festival of the Assumption of the Virgin, which is celebrated officially there every year.

On October 28, 1940, after having asked and been denied free access for the Axis powers through Greece, Italy declared war on Greece. Metaxas became a hero overnight. His reported one-word response to the Italian Ambassador – Ohi (also transliterated Ochi), “No” – became the motto of the Resistance and to this day is celebrated yearly (as Ohi Day, on October 28).

An entire mythology has been created around the moment of resistance, a heroic and patriotic stance by Metaxas that seems incongruous with his political position vis-à-vis both Axis powers. The fact that he was awakened at 3:00 a.m. by the Italian minister, that he opened his door wearing his pajamas, housecoat, and slippers, that the moment he heard the Italian demands he immediately pronounced the denial—all this has made it into the official historical imagination.

Count Galeazzo Ciano, Italian minister for foreign affairs and Mussolini’s son-in-law, mentions in his diary what has not been taken up into historical memory—namely, that when the Italian minister to Greece, Emanuele Grazzi, returned from Athens on November 8, 1940, as the war in the northern mountains raged between the Italian and the Greek armies, he reported a very different encounter between himself and Metaxas. According to Grazzi, Ciano claims, “Metaxas, receiving our ultimatum in his nightshirt and dressing gown, was ready to yield. He became unyielding only after having talked with the king and after the intervention of the English minister” (Ciano 1947: 308).

Greek forces fought the Italian army in the mountains of Epirus from October 1940 to April 1941, at which point the German army attacked, entering Greece through Bulgaria. On April 19, 1941, the Bulgarian army entered Yugoslavia and Greece, and on April 27 German tanks entered Athens. By Hitler’s decree, no Greek fighter who had participated in the battles against the invasion was taken as prisoner of war, an act Mussolini resented deeply.

King George II (a cousin of the British royal family) and the Metaxas government (Metaxas himself had died on January 29) escaped to Egypt, where they proclaimed a government-in-exile with a seat in London and Emanuel Tsouderos as prime minister. This government was initially recognized by the Allies and considered legitimate by the majority of the Greek population. Through the insistence of Great Britain that the king appoint moderate ministers, George II appointed Centrist ministers, but he also included two members of the Metaxas dictatorship, Maniadakis and Nikoloudis. The fact that the government in exile included members of the Metaxas government delegitimated the king’s gesture in the eyes of the Greek population, most of whom then refused to recognize it. This government-in-exile did not officially dissolve the Metaxas regime until February 7, 1942.

Meanwhile, on April 30, 1941, three days after they entered Athens, the Germans set up a collaborationist government under the premiership of George Tsolakoglou, one of the three chiefs of staff, who appointed officers of the Metaxas dictatorship to serve in various posts.

Tsolakoglou issued orders that decreed the conduct of the Greek population toward the occupying forces. A “Daily Address of the President of the Government to the Army,” issued in the first days of May 1941, announced:

“Now that, on account of the magnanimous gesture of the Führer, Leader of the German Nation, freedom has been granted to all military officers and soldiers, I must address the following matters to all those who fought on my side and those who fought on the side of my collaborating generals. …The German Army has not come here as an enemy, as an adversary. It has come as a friend. It occupied our land in order to expel the English from mainland Greece. They, an evil fortune, had been invited to our national land by our criminal government. We are obligated to exhibit our friendly feelings toward the Germans, to submit to the new order of things, and to take to heart the great dogmas and the great principles of National Socialism, this new political religion, which has been created by the luminous mind and great psyche of the Führer. Returning now to your homes, maintain your gratitude to the Führer and apply yourselves to your peaceful endeavors…

This was not the only directive at collaboration to be issued. Among others, the “People’s Committee of the Prefecture of Chania” (headed by the Bishop of Kydonias and Apokoronou, the ecclesiastical administration of the area), issued a communiqué that was published on September 22, 1941. It exhorted the people of Crete to work hard and with “conscientious loyalty to the law,” so that, with the help of the German authorities, they could rebuild Crete. In order for such a fast return to civilian life to take place, the communiqué continued, it would be imperative that the people of Crete surrender their arms, as had been requested by the German authorities and the Greek government in Athens.

In the eyes of the population, the collaborationist government was immediately exposed for what it was, and then some. It was a government both unable and unwilling to protect the population from German atrocities; it handed all the political prisoners from the Metaxas dictatorship over to the Germans, who sent many of them to the German concentration camps (primarily Dachau and Buchenwald), while keeping the rest in prisons in Greece; its corruption and financial mismanagement created galloping inflation and food shortages that, on top of the blockade imposed by the British in order to cut German lines of support and the German appropriation of Greek products, led to a famine that lasted from the autumn of 1941 until the spring of 1942 and that both decimated the Greek population and produced a rampant black market. All these circumstances not only incited hostility toward the government among the Greek population but also rendered imperative the need for active resistance against both the occupation forces and the collaborationist government.