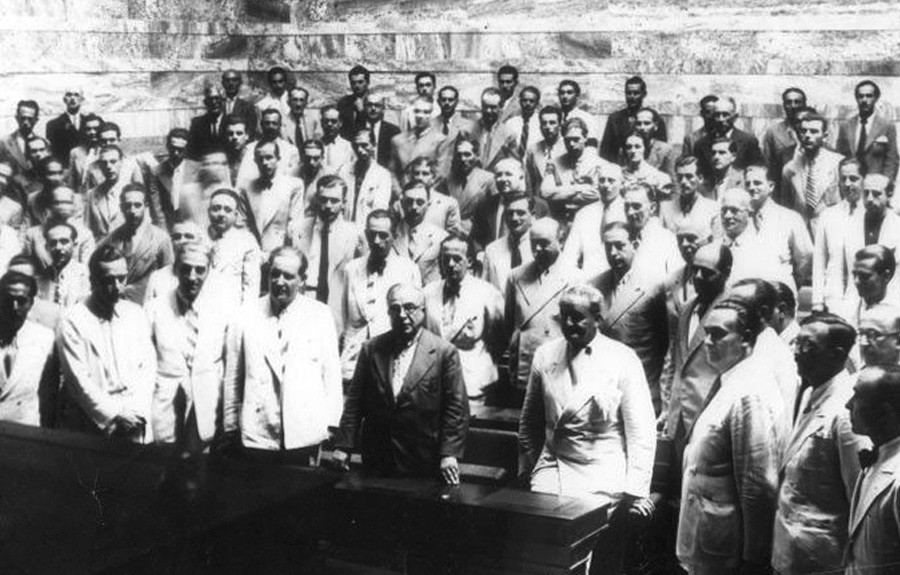 Opposition against the Metaxas regime

With the exception of his late months of life, Metaxas was never extremely popular, and the regime he established in 1936 was not either. But Metaxas enjoyed some sort of social acceptance or even support, and because of this, he could withhold the most powerful seat of power in Greece and lead an authoritarian regime for almost 5 years with no serious opposition. In fact, no other than Death itself could dethrone him.

However, resistance against Metaxas always existed, even prior to the establishment of his dictatorship. When on April 1936 Metaxas was appointed prime minister following a failure by the Liberals (Venizelists) to come to an agreement with the anti-Venizelist parties, a strike was called all across the country with Macedonia being the center of the protests. On 29 April 1936, the tobacco farmers of Macedonia went on a strike to protest Metaxas’ appointment and on 9 May a general strike began in Thessaloniki.

As consequence, protests spread over the country with slogans comparing the situation in Greece with that of Spain, where conflict had ended in a brutal and bloody Civil War. These protests were directed primarly against Metaxas, who had given the orders to send the Army, and were a proof that there were pockets of anti-Metaxas insurgence the Cephalonian would have to deal with.

Paradoxically, it’s is precisely these anti-Metaxian protests, and the threat of a Communist takeover, which boosted Metaxas’ ascent to political power and led him to set up the 4th of August regime under the auspicies of the King.

At first, the New State was met with relief by the largest portion of the Greek society, which was fed up of the political turmoil which had poisoned Greece’s life for many years. However, over time opposition to the regime grew in some flanks. Obviously every Greek had his/her own reasons to like Metaxas or not, but generally speaking there were a handful of mainstream trends:

Many peasants and farmers disliked the government’s reforestation policy, since it restricted the pasturage of goats and, farmers claimed, worsened the peasants’ livelihood. On the other hand, the working class in the cities did not like, as one could expect, the fact that strikes were forbidden and unions were suppressed. Lockouts were also prohibited, which did not make employers and bosses happy and fueled anger against Metaxas. Finally, the upper classes underwent a tax increase and were forced to contribute to the gigantic EON and cover the government’s war expenses, which made Metaxas also unpopular among the most privileged.

In general terms, the civilian society did not like the extensive supervision, surveillance and control which were characteristic of the Metaxas regime. The most eminent Greeks were put under the strict observance of the Asfaleia, the Security Police which produced thousands of surveillance reports about their beliefs and actions. Meanwhile, ordinary Greeks, while not particularly scrutinized, were aware of the incredibly efficient iron hand of Maniadakis and lived in fear not to attract the Asfaleia’s attention.

Among all Greeks those of Pontic origin were specially antipathetic to the regime. They disliked Metaxas for his hostility towards Rebetiko music, which was one of the main expressions of Pontic culture, because Metaxas regarded it as undesirable because of its Levantine origin.

In geographic terms, antipathy towards Metaxas was especially important in Crete. Not only Crete was the birthplace of Metaxas’ archenemy Venizelos (and the latter had a great following there), but Cretans had traditionally been the most devoted Republicans in Greece, with a widespread and historically strong resistance against all kinds of authoritarianism and also against Monarchy. For this reason the Archigos received a very cold public reception in the island when he toured the region.

It should surprise none then, that the most serious attempt at dethroning Metaxas took place in Crete. On 29 July 1938, an armed insurrection broke out on the island. The rebels quickly seized control of Chania, the principal city on the western part of the island. However, the government soon regained control of the area when the Navy and the Air Force were brought into action and the mutiny was digilently extinguished.

The ‘Cretan Uprising’, as it was called, had been promoted by well-known Venizelist politicians such as Emmanuel Tsouderos, Periclis Argyropoulos and Aristomenis Mitsotakis. Metaxas ordered the arrest of a number of former politicians and ex-officers which he thought were involved in a nation-wide plot, and by doing so he limited even more the alternatives open to the King, who saw his position weakened considerably as he was now more dependant on Metaxas than before. The US ambassador in Greece noted, on September 1938, that the King’s influence with the government was now non-existent and that he was no longer in control of the Army, which had fell under Metaxas’ tight control.

In fact, Metaxas emerged reinforced after this episode, and he shifted towards a more hard line policy since then. The dictator himself stressed that he had been soft until now, but, in the future, action would be taken against political agitation. The British ambassador Sydney Waterlow went to inform the Foreign Office that Metaxas had tightened his grip and officially announced that the regime was now a totalitarian one and that there was no room for dissension.

Tension with the Church

The 1938 Cretan Uprising was not the only test put to Metaxas’ endurance. In November the same year, an internal power struggle in the government showed that Metaxas still had enemies. This situation was triggered by the election of a new Archbishop of Athens and primate of Greece (the spiritual leader of the country), certainly not a minor issue in a country where the Church was very powerful.

The two main contenders were Damaskinos of Corinth and Chrysanthos of Trebizon. The former was a leading opponent of the regime and, although Metaxas had adopted a neutral stance regarding the electoral procedure, he was much closer to Chrysanthos, who was also clearly favoured by the King, George II.

The voting saw Damaskinos receive 31 votes while Chrysanthos obtained 30 votes, effectively making Damaskinos the elected archbishop of Athens and primate of Greece. The appointment was read as an anti-Metaxian movement performed by the Church and the dictator, discontent with the result, annulled his election and sent Damaskinos to exile in a monastery in the Greek mountains. The episode showed that there was a relevant unease against the regime even in the conservative Church, yet it also proved Metaxas’ strength and ability suppressing all kinds of opposition.

The last serious coup against Metaxas was in the summer of 1940, when a plot against Metaxas was sketched by some officers who wanted to align Greece with the Axis powers. Throughout his dictatorship, Metaxas had been carefully balancing his foreign policy between the Axis and the Allies, but some germanophile officials wanted Metaxas to drop the ambiguities behind and join the Pact of Steel. However, the conspiracy was dismantled by the efficient Maniadakis in a few hours, as he had been informed of the plan beforehand by his wide network of secret informants.

As in the Cretan Uprising, this latter attempt to overthrow Metaxas was expeditiously suffocated by the capable political police, the Asfaleia, which enabled Metaxas to remain in power for the rest of his life without any other outburst of opposition.